The Arizona Cardinals Defense Before and After Clancy Pendergast

Share All sharing options for: The Arizona Cardinals Defense Before and After Clancy Pendergast

On Friday morning the Arizona Cardinals got some news that most fans were expecting, Todd Haley had taken the head coaching job with the Kansas City Chiefs, but the day ended with some surprising news to some, Clancy Pendergast would not return as defensive coordinator. While Pendergast certainly wasn't the most popular coach in Arizona his defenses did an admirable job in the post season and were a big reason why the Cardinals ended their season playing for the title of Super Bowl Champion. So why would Whisenhunt and the front office let Pendy go now?

Plenty of conspiracy theorists will wonder for quite a while if Pendy's fate would have been different if the Steelers hadn't driven 78 yards in the final two minutes of the Super Bowl. Maybe he'd have been retained or maybe it was time to go either way. Frankly we'll never know, but one thing that's very clear is that Pendergast's defenses were not consistent. He didn't inherit a stellar group considering that they allowed 344 yards per game (26th) and 28.2 points per game (26th), but after 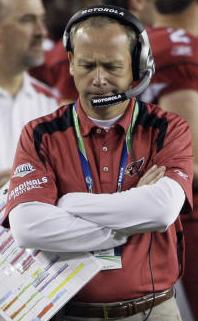 showing marked improvement in 2004, his defenses were middle of the road at best. The ultimate black mark on his resume could be that after lowering the points allowed per game in 2004 to 20.1, his defenses gave up more points every year of his tenure:

It doesn't help Pendergast either that the Cardinals spent nine picks on defensive players in the first three rounds of the past five drafts. The coaching change wasn't easy on Pendergast either as he tried to transition his defensive scheme from a 4-3 to some form of a 3-4 to appease the wishes of Ken Whisenhunt. The result was hybrid alignment that was at times very good but at other times was simply out of place and exploited. So the next question is what does the future hold for the Arizona Cardinals defense?

Get Ready for True 3-4 Defense: There seem to be two leading candidates right now for the Cardinals new defensive coordinator, current linebackers coach Bill Davis and the Steelers current linebacker coach, Keith Butler. The common thread that both of them share is solid experience in a 3-4 defense. Davis started his NFL coaching career as a defensive assistant with the Steelers from 1992 to 1995, where he was on a staff with Dick LeBeau, Dom Capers and Marvin Lewis. Davis' next stop was in Carolina where he followed Capers and became the outside linebackers coach and he was with the Panthers for four seasons. He had a couple of one year stints with the Browns and Packers before catching on the with Falcons where he helped them switch to a 3-4 under Wade Phillips. After three seasons with the Falcons, he moved onto the Giants for a season before finally landing in San Francisco where he was a defensive coordinator. In his two seasons as the Niners' DC, the Niners defense ranked 32nd in yards per game in 2005 and 26th in 2006. Davis was fired after the 2006 season and has been the Cardinals linebackers coach the past two seasons. He could concievably construct the defense into the true 3-4 that Whisenhunt wants to use.

The 'other' candidate right now is Keith Butler but his candidacy depends on whether or not the Steelers will allow the Cardinals to interview him. When Whisenhunt originally took the job in 2007, he wanted bring Butler with him but the Steelers blocked the move because Butler was still under contract. According to those 'in the know,' Butler is still under contract but Kent Somers is reporting that the Steelers are expected to allow Butler to interview. Butler has held several different jobs, in the college and professional ranks, throughout his coaching career, but his calling card is working with the Steelers linebackers for the past seven seasons. He's worked under Dick LeBeau and by all accounts has a thorough understanding of the "Blitzburgh" 3-4 that Whisenhunt watched succeed during his time with the Steelers.

We don't know yet of other candidates but I'm sure that Whisenhunt has more than two guys in mind. We'll dive into the 'what ifs' and timing of the move as the week drags on and we'll also look at how the current personal matches up in a 'true 3-4.' For now though, what other 3-4 coaches are on the market? If it comes down to Butler or Davis, who would you rather have?