Revenge of the Birds is in for a special treat today as Elliot Vallejo, Arizona Cardinals' offensive tackle, sits down to answer our questions. Vallejo just finished his second year with the Cardinals after being undrafted in 2007. He was an experienced college player after starting for three seasons at UC Davis and he's worked his way up the food chain with the Cardinals. He spent the entire 2007 season on the practice squad but after a strong preseason, that included an especially dominant perfomances against the Raiders and Chiefs, he made the roster out of training camp. When injuries started to hit though he was moved back down to the practice squad for a short period before being added back to the roster in December when Clark Haggans was placed on IR. 2009 could be a big year for the 6'7 312 pound tackle, but as he prepares for the off season he also took the time to talk to us.......Enjoy.

ROTB - You've been in the Cardinals organization for two seasons after being un-drafted out of UC Davis in 2007. What was that final couple of 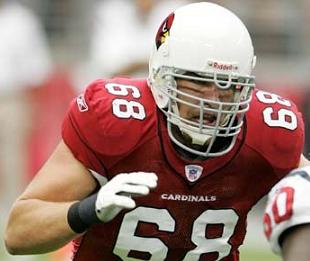 months before the draft like and what has been the biggest difference between college ball and the NFL? Are there aspects of the college game that you miss now?

The biggest difference from college for me was the amount of information I was expected to process quickly and how perfection was expected every play. The players were not as good as I though they were going to be, but they were still better than most the guys I played against in college.

College was unique for me as compared to most guys in the NFL now because I went to a small school that didn't have a well funded football program. Our entire athletic budget for every sport was much less than most 1-A football budgets alone. I know it sounds funny, but I miss having to save money on trips and being frugal. People can be so wasteful when amenities are so bountiful.

ROTB - At UC Davis you started 32 consecutive games (presumably all at RT?) so you were a pretty seasoned collegiate player but what parts of the game has Russ Grimm been working on you with over the past two seasons? Also do you think Grimm's hands-on approach with the offensive line will change at all with his added co-coordinator responsibilities?

EV - Russ is great coach and he has mainly been working with me on fine tuning. We have done a little technique work, but we have mostly been working on reading defenses and being able to anticipate what is going to happen after the ball is snapped.

Russ is a guy that seems pretty set in his ways. I believe he will be just as hands on. I also don't think any of my fellow o-lineman would be happy if his role was diminished with us in anyway. We all really like him.

ROTB - The Cardinals just finished up the best season in their history and they've got a ton of free agents but the offensive line looks like it might return in tact. We've all heard Whisenhunt's mantra about competition during camp though, so I'm assuming that no one is assured of a starting gig just yet. What goals or

expectations has the coaching staff discussed with you about 2009 and what goals have you set for yourself?

EV - The coaching staff wants me to continue to improve the way I have been. They believe I have to ability to continue getting stronger and becoming a better player overall. For me, this off-season is going to be very crucial. In the off season is where I can improve myself in relation to the players that I am competing with. I want to get stronger and faster. I would also like to work on my ability to take in information from multiple sources (ie. Defense moving around, guard talking to me, quarterback audible etc.) simultaneously. This ability will come with more practice.

ROTB - As I'm sure you were well aware, the Arizona Cardinals don't have the most illustrious history but things seemed to be pointed in the right direction under new head coach Ken Whisenhunt. Since you came to the Cardinals around the same time as Whisenhunt and Russ Grimm do you hear other veterans in the locker room talk about the differences between the present and the past?

EV - Yes, I hear stories of the old Denny Green days and how things were so much different. Lets just say that I am happy coach Whiz is here.

ROTB - Being a rookie is tough in the NFL and you hear funny hazing stories from time to time but I'd imagine that it's even tougher on an undrafted rookie. What was your first training camp and pre-season like in 2007 and did having that experience help you during camp this past season?

EV - Yeah, I got hazed pretty badly at times because I tried to rebel a couple of times. It was a terrible idea. I'll list my hazings for your entertainment:

ROTB - My final question is more of series a questions because I've always been strangely fascinated by the life of a practice squad player (maybe I watched Rudy one to many times as a kid) and you've gotten to see both sides of the coin over your two seasons. Other than dressing on game days, what are the major differences between being on the roster or the practice squad?

EV - Besides making more money and the extra benefits (401k, etc.), I feel you are respected more. You bond more with the guys on the long road trips and you get to see a lot more.

ROTB - Do you play both sides of the ball in practice and do coaches spend time working with 'squad' players to improve their game?

EV - It is a rarity for a guy to play on both sides of the ball. My only encounter with it was this year when a p-squad line back had to play some scout team tight end because all of our TE's were hurt. During the season, all of the focus is on the starters and making sure they're ready. The off-season is were younger, more raw players get all the attention.

ROTB - Do 'squad' guys travel with the team on road trips and if not, did the team make an exception for the two week 'road trip' early this season?

EV - With the cardinals, the p-squad does not go on road trips unless they are needed for practice, such as the Superbowl and our infamous east coast trip.

ROTB - What's the process for other teams to claim you off the practice squad and did you ever have to go through the process?

EV - A team cannot claim some off of the practice squad, but they can offer them a spot on their roster and it is up to the player to accept it or not. It is always common courtesy to let the player's current team have a chance to match the other teams offer. I never had to go though that my rookie season, but this year when I was released for a couple of weeks, I had to go though that a number of times. Luckily I have an agent that takes care of it all for me.

Many, many thanks to Elliot for taking the time to answer some questions from a lowly blog like ours and best wishes to him and his family. Hopefully he'll be a name that we'll hear much more from in 2009.