News of Anquan Boldin being disgruntled and making waves have died down over the past month, but there's not doubt that it's still a huge issue between the Arizona Cardinals and the player affectionately known as 'Q.' The franchise has maintained that they still want Boldin as part of their current team and part of their future but they don't seem overly willing to extend Boldin, who still has two years remaining on his current contract. Boldin, who was outspoken last off season, at points during the season, and most recently immediately after the Super Bowl, seems to have softened his stance a little bit, but it's obvious that the two sides don't see eye to eye. With that in mind here's the most recent news concerning Boldin and the Cardinals: 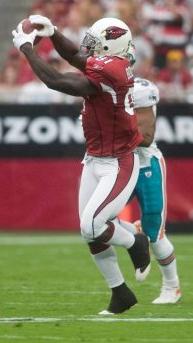 Despite both sides seeming somewhat amicable right now, experts are still spending their time speculating where Boldin would end up if traded and why not. If you type "trade Anquan Boldin" into a Google search you get over 78,000 results in less than a second. There even some experts who are willing to go as far as saying that he will be traded.

....the last receiver you want to see in the open field with the ball in his hands. Yes, Randy Moss might strike the most fear in NFL players when he lines up before the snap, but once Boldin catches the football, he's the scariest thing on the field.

So what should the Cardinals do with Boldin......

The Cardinals have but three options, pay Boldin, trade Boldin or simply make him play. At this point trying to predict what will happen is pure speculation because no one including Rod Graves or Boldin himself has any idea. I frankly wouldn't be surprised by any of the three outcomes although I think Warner's return reduces the possibility of a trade.

I won't go as far as guaranteeing that he'll be a member of the 2009 Arizona Cardinals but the team seems to be loading up for championship run with Warner at the helm and Boldin is more valuable, in the short term, than two or three extra draft picks. I'd also almost guarantee that if Boldin still a Cardinal on April 27th (day after draft) that he'll be a Cardinal for the 2010 season. Player for player trades are extremely rare and trading him in July for picks in the 2010 draft does nothing to help this current squad.

Whether or not that is true remains to be seen, but what do you think? Will Q be a Cardinal in 2009 or will be call another frachise home? Will he get a new contract this off season?