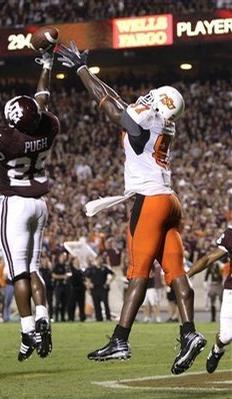 Positives: Brandon Pettigrew is an absolute beast for a tight end. Over 6'5, and he still has more room to grow (muscle). Has an impressive frame and muscular build. Most tight ends are catch-happy, while Pettigrew loves to block, and is freakishly strong at that. Excels at blocking for the running game. Uses natural strength to move defenders. Has an unusual quickness for his size, and can run through defenders effectively. Has sure hands and watches to see if the ball is secure first, before running with it. Will move a pile of defenders and truck any oncoming. He runs like a bull, and will often challenge a defender. Pettigrew has a tremendous upside, and is the most complete tight end in the draft.

Negatives: Brandon may use his natural skills more then polishing areas for improvement. He hasn't developed as a down-field threat yet, and may not command any double teams. Needs to improve overall on his receiving skills. May have character issues. Was arrested for a felony charge of assault and battery of a police officer in 2008. May not be NFL-durable as an ankle injury ruined his chance to blossom in 2008.

Overview: Pettigrew's stats were anything but spectacular in college and it may seem like a surprise that he is the top tight end in the draft. However, his size, strength, and natural skill make it hard to pass on him. His few areas of improvement seem like they will eventually come to him, and if he can avoid any character/attitude issues, he will be the next star tight end in the NFL.

Projected Round: Mid - Late 1st Round

Why he should be a Cardinal and how he will fit into the Cardinals offense...

How he will fit into the offense: Pettigrew probably wouldn't start for the Cardinals, but he would get a large amount of playing time serving as a back-up. Pettigrew would ideally be used on special teams. He would also be used in short-yardage situations, as his blocking skills would be needed. His sure-hands would come in handy in the redzone, as Kurt Warner has shown that he likes to throw to tight ends in that situation. Pettigrew was also on the receiving end of a lot of dump-off passes in college, and could be used for that same reason as a security for Kurt Warner.

I catch the ball well, block well too. I think that I could use work on running better routes. I'd rather block...and catch. If I had to pick one I'd say that I'd rather block...My goal is to just go as high as possible. I'll be blessed wherever I end up going.