As a change of pace, and to shy away from all of the mock drafts, here at Revenge of the Birds, is a breakdown of the last 10 Arizona Cardinals 1st round draft picks. Many never lived up to expectations, and if you want the definition of a draft bust, just check out who's first on the list.

Draft Analysis: Wadsworth was regarded as one of the most sure-things heading 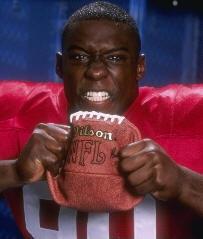 into the 1998 draft and was one of the reasons the Cardinals decided to draft him. He was taken after Peyton Manning and Ryan Leaf, who both received hefty rookie contracts. As a result, he ended up holding out the entire training camp before the Cardinals signed him to a 6-year $42 million contract, the day before the season opener. Wadsworth played all 16 games and recorded 5 sacks with 57 tackles that year. He followed up his rookie season with an injury-riddled next two years. He required 3 knee surgeries in that span and 4 in his career. He only managed 3 more sacks and played in only 22 games as well.

Where he is now: Wadsworth was actually looked at by the Bucs and Jets in 2007 and was signed by the Jets to a vets minimum. He only managed to play on the practice squad and he was released before playing at all.

Draft Analysis: When the Cardinals drafted Boston in 1999, they were hoping to get

a franchise wide receiver. He was productive for the time that he was in Arizona, but wasn't exactly what the Cardinals wanted. He didn't show a strong work ethic and tended to show-boat too much. He made the pro bowl once in 2001 when he caught 98 receptions for 1,598 yards and 8 touchdowns. Boston only played in 8 games the next year and was released following the 2002 season. He bounced around to the Chargers, Dolphins, and Bucs for the remainder of his career in the NFL, and was never productive again. After several injuries, a DUI arrest, and accusations of steroid usage, Boston spent his last year in the NFL in 2007.

Where he is now: David Boston was signed by the Toronto Argonauts of the CFL in 2008, where a foot injury held him to two catches for 16 yards. He required surgery following the season, and hasn't returned to Toronto since then. 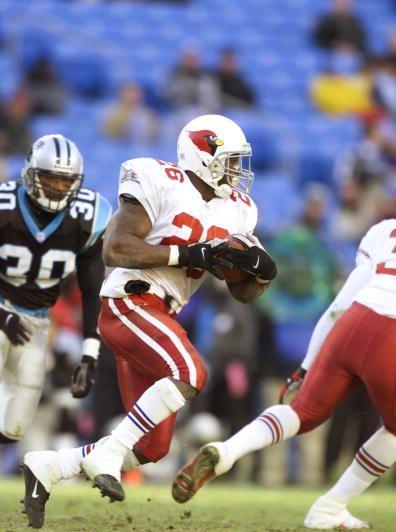 Draft Analysis: Jones was taken very early in the 2000 draft with the hope of establishing a dominant running attack. The Cardinals didn't get what they wanted as Jones was injury-prone and only started a full season once, in 2001. It didn't help that he split carries with Michael Pittman either. For his time in Arizona, Jones ran for 1,264 yards and 9 touchdowns total. He spent his last season with the Cardinals in 2002, and was traded to the Bucs the next year. In Tampa, Jones didn't have stand-out numbers, but he was solid and had a 4.6 yard average. That led to him to a contract with the Chicago Bears, where he had his best season at the time, in 2005, rushing for 1,335 yards and 9 touchdowns. The next year he led the Bears to the Super Bowl, only to fall short.

Where he is now: Thomas Jones was traded to the New York Jets for a 2nd round pick, and he is currently their starting running back. He had the best season of his career in 2008, as he led the AFC with 1,312 yards and 15 total touchdowns. He also made his Pro Bowl last year. 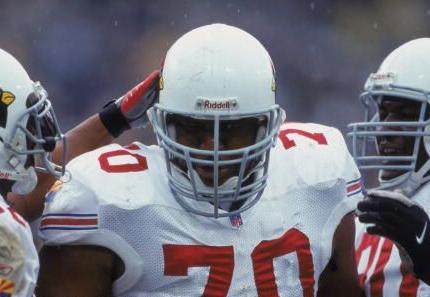 Draft Analysis: L.J. Shelton began his career as a Cardinal by holding out until the 2nd game of the regular season. Although he started 77 out of 96 games as a Cardinal, he never had a high motor, and tended to look lazy at times. He encountered several ankle and knee injuries, and was eventually released by the Cardinals in 2005. He was signed by the Browns that year, then played the next two years for the Miami Dolphins, where he struggled heavily. He was released by the Dolphins in 2008.

Where he is now: Shelton is currently in a 2-year contract with the San Diego Chargers. He is a back-up offensive tackle.

Draft Analysis: When the Cardinals drafted Leonard Davis with the second overall pick in 2001, they were hoping to solidify their offensive line, and make him the cornerstone of it. He was their second tackle taken in the last 2 years and never lived up to any hype. He was drafted as a tackle and played that position for the first three years. After that didn't work out, in 2004 he was moved to play guard. He was supposed to be the best lineman in the draft, but his time as a Cardinal could be summed up as a "bust". He gave up 34.75 sacks, committed 44 penalties for 276 yards as Cardinal. Whenever the whistle would blow before the snap, most Cardinal fans knew it was big Davis committing a false start. In 2007, Davis received news that he wouldn't receive a franchise tag, and later became a free agent.

Where he is now: Davis had his breakout year when he signed with the Cowboys in 2007. He made the pro bowl that year and established himself as one of the best guards in the league. He is still currently under roster with the Cowboys and is going on his 3rd year with the team.

Draft Analysis: Wendell Bryant was another lineman that had a lot of hype heading into the draft. He was regarded as a lineman with a lot of potential that could play both defensive end and defensive tackle. Wendell's career didn't last long as a Cardinals as he was released after three years. He recorded 39 tackles and 1.5 sacks in 3 years.

Where he is now: Bryant never signed with another team and his current status is unknown.

Draft Analysis: Johnson was a star receiver at Penn State and was one of the best leading up to the draft. He was picked 17th overall by the Cardinals and was part of a rebuilding project. Another wide receiver, Anquan Boldin, was drafted in the 2nd round and out-shined Johnson his entire career. Johnson however, was productive and served well as dependable 3rd-string receiver. The Cardinals released him last year and he was signed by the San Francisco 49ers to a 1-year deal. Being in Boldin and Fitzgerald's shadow was no excuse, as he only caught 45 receptions for 546 yards and 3 touchdowns for the 49ers. Johnson was not resigned and wound up as a free agent this year.

Where he is now: Bryant was signed by the Detroit Lions to a 3-year $9 million deal, and will be part of another rebuilding project. Times will be tough for Johnson again, as he will now be in Calvin Johnson's shadow.

Draft Analysis: With the very next pick, the Cardinals took linebacker, Calvin Pace.

There was much speculation going into the draft if whether or not the Cardinals would draft hometown player, Terrell Suggs. They proved many wrong when they drafted Pace instead. Pace was used as a defensive end for the first 4 years of his career. In that span, he was highly considered a draft bust, as he only recorded 84 tackles and 7.5 sacks. In 2007, he was switched to outside linebacker and flourished. He had career highs in all categories and recorded 106 tackles and 6.5 sacks. The Cardinals failed to sign him after that year and he ended up a free agent.

Draft Analysis: The Cardinals scored huge when they drafted Larry Fitzgerald with the 3rd overall pick in 2004. Many weren't sure if the Cardinals needed a receiver with new-found talent, Anquan Boldin. The move, however, paid big dividends when Fitzgerald showed his worth. He became an instant threat with his superb hands and leaping abilities. Five years later, Fitzgerald is a 3-time pro bowl selection, with All Pro Honors once, and now owns the best performance by a receiver in the playoffs.

Where he is now: Fitzgerald is currently still playing for the Cardinals and it looks as if he will remain one for a long time. He is now considered the best wide receiver in the NFL.

Draft Analysis: Rolle was an All-American college corner and was highly regarded as a shut-down corner going into the draft. He was know for his press coverage and actually shut down Larry Fitzgerald when they played each other in college. When he was picked 8th overall, there was a hope he would become one of the premiere shut-down corners in the league. He become anything but that. His first year, he required knee surgery, and was unable to play the full year. He struggled the next two years until he found his groove as a nickel cornerback. Last year, Coach Ken Whisenhunt felt that Rolle could perform more to his ability at the free safety position, and that's exactly where he ended up.

Where he is now: Rolle is currently the starting free safety for the Arizona Cardinals defense. He struggled in the first half of last season, but came around as the playoffs approached. It seems now that Rolle is living up to his pre-draft expectations.

Draft Analysis: In 2006, Matt Leinart was considered the top quarterback in the draft class. When he fell to the Cardinals and the 10th overall pick, most felt it was a steal. In his first year, he eventually took the starting job from quarterback Kurt Warner, and performed considerably well for a rookie quarterback. In Matt's second year, he shared snaps with Warner, and grew unhappy with his role. He made public statements that the Cardinals should "ride or die with him". Eventually, he "died", while receiving a brutal hit from Ram's linebacker, Will Witherspoon. Leinart's season was over at that point, and that's the last we've seen from him.

Where he is now: Leinart is currently the back up to veteran Kurt Warner. He has 2 years left on his contract, and from what's been said, Leinart is willing to wait until it's his chance to take over as the Cardinals starting quarterback. 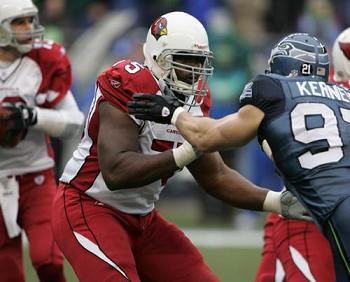 Draft Analysis: Brown was a second team All-Amercian throughout college and was an anchor on the offensive line. Before the draft, most mock drafts had the Cardinals taking some sort of lineman. Most thought the Cardinals would draft other tackle, Joe Thomas, but he was drafted by the Cleveland Browns before the Cardinals had a chance. They ended up drafting Brown with hope his college skills would carry over to the NFL. In his first year, he was supposed to learn and develop as a back up. That didn't last long, as Oliver Ross went down early in the season. Brown was forced to start earlier then expected, and struggled with play and injuries his first year. Brown did struggle at times last year protecting Warner, as he gave up more then 11 sacks on the year.

Where he is now: Brown is currently with the Cardinals and will be the starting right tackle next year. Brown has improved in the running game but needs to develop better pass protection to stay a starter in the NFL. 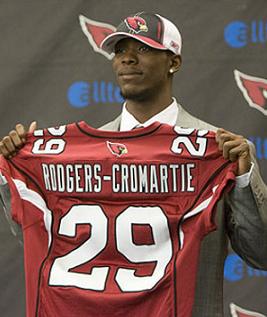 Draft Analysis: Rodgers-Cromartie was considered one of the best cornerbacks available in the 2008 draft. Most mock drafts had the Cardinals taking him in the first round. It was said that he had a "high learning curve", and it showed in his rookie year. He didn't start a game till halfway through the season. In his time as a rookie, he showed he could learn from mistakes, and make up for any lost ground. DRC transformed into a shut-down corner towards the end of the regular season and into the playoffs. He lived up to being a 1st round pick.

Where he is now: DRC is the starting cornerback for the Cardinals and is now one of the top corners in the league in just his second year. Playing in the Super Bowl should surely benefit and add to his growing confidence.