Originally, I was set to mock the Lions 1st overall pick to Aaron Curry, but with the trade for Julian Peterson over the weekend, I don't see that happening now.

Positives:  Stafford is a strong, well-minded quarterback who will come in and work hard to improve the Lions offense. He has good strength and can easily thro 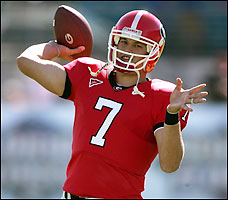 w the ball up field. He has the ideal size for a quarterback, with a decent quickness as well. Stays strong in the pocket and is not afraid to take a hit. Will try to extend plays and find an open receiver. Has a strong work ethic with no attitude issues. Stafford is a smart, poised quarterback, who will bring everything he has every week.

Negatives: There are only a few drawbacks to Stafford. Most critics think he may not be worthy for the 1st overall pick, and may be there by default. He isn't quite NFL-ready, and may need to develop, rather then start immediately. Sometimes forces throws and will try to predict where a defender will be. Will throw off his back foot a lot, which could result in turnovers. Stafford is quick but is best suited as a pocket passer, and will struggle on the run. Takes a lot of hits, which will worry some scouts, as the beating may affect his durability.

Why the Lions will draft him: Stafford is the top quarterback prospect going into the draft and is a position the Lions need to address. With Culpepper not what he used to be, and no other significant quarterbacks on the bench, Stafford is the likely pick. After going 0-16, they need to establish some kind of consistency, which Stafford will bring. He will improve this team, and become the franchise quarterback. With two picks still very early, the Lions can upgrade the offensive line later in the draft.

As a reminder, Hawk is officially on the clock with the 2nd overall pick for the St. Louis Rams.