Positives: Curry's the complete package with size, strength and speed to compliment above average instincts and awareness. He's an aggressive, physical tackler who's capable of making plays from sideline to sideline. He's comfortable in 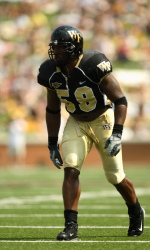 space meaning that he's very capable in coverage and he's a plus pass rusher as well. On top of all of that he's durable (never missed a game in college) and was considered a team leader.

Negatives: He can get too aggressive at times and some think that he relies too much on his athleticism at this point. While he's a decent pass rusher, he doesn't have a great repertoire of moves. He's also not as tall as some would like as an outside linebacker.

Why the Chiefs will draft him: It's simple, Curry instantly improves a defense that ranked 31st in 2008. He'll be a force against the run and improve a pass rush that registered just 10 sacks (wow, that's bad), including just two sacks from the line backing corps, last season. Brian Orakpo is another guy that I considered but his injury concerns push him below Curry. They also need help along the offensive line but guard is a bigger need than tackle (which is why Jason Smith wasn't the pick) and other needs include wide receiver, nose tackle and defensive back.

Many thanks to our very own kj197728 for submitting this pick and I'm sure that our good friend Clancy Pendergast would love to see the draft turn out like this. The Seattle Seahawks and KDean75 are on the clock (e-mail to revengeofthebirds@gmail.com), with Cardinal_Fang and the Browns on deck. If anyone needs to refresh their memory on the draft order, check it here.