Share All sharing options for: Clark Haggans Signs a Three Year Deal With the Arizona Cardinals 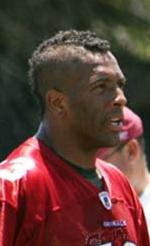 The Arizona Cardinals bolstered their depth at outside linebacker today by signing Clark Haggans to a three year contract. Haggans spent the first eight seasons of his career in Pittsburgh before signing a one year deal with the Cardinals last off season. The 32 year old played in eleven games last year before his season was cut by injuries. He finished the season with 27 tackles, a sack, a forced fumble and two passes defended but his biggest contributions were on special teams and as a quality veteran presence in the locker room.

Haggans projects as the main backup at OLB and he'll again contribute on special teams. His experience in the 3-4 defense makes him a valuable role player and could be a good mentor for a rookie trying to make the transistion from DE to OLB. The length of his contract is a bit surprising, considering his age, but when you consider that he's got more experience as a 3-4 OLB, he'll likely be a player/coach by the end of his contract. Bertrand Berry is expected to be the next free agent to be re-signed by the team.

Do you like the signing and does it lessen the need for an OLB early in the draft?