I thought this was going to be easy but it's not. The Seahawks have multiple needs (in no particular order): Offensive tackle, defensive backs (safeties and corners), wide receivers, defensive tackles, linebackers, running backs. They've filled some of these holes already by the free 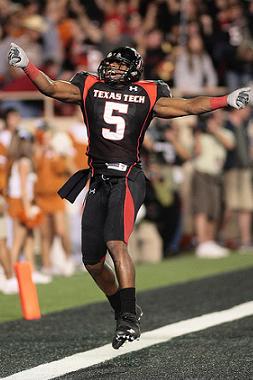 agent signing of TJ Whosyourmama and the trade of Julian Peterson for Cory Redding and a 5th round pick. But it's these transactions that have put some doubt in my mind.

Any of the corner back or safety prospects are not a good value at this pick, so none of those. The only LB worth drafting here was Curry, but the Chiefs wisely just took him. Knowshon Moreno would be a nice play maker for the Seattle, but he would also be a huge overdraft. The Seahawks still have Walter Jones at left tackle and Sean Locklear did a good job playing left tackle last year while Jones was hurt. Locklear will return to right tackle this year and the Seahawks re-signed Ray Willis to backup Locklear, so with an injury to either Locklear or Jones, the Seahawks feel safe.

That leaves defensive tackle and wide receiver. The Seahawks still need WR's, so Crabtree? It's well documented that the Seahawks had some issues at WR last year and while TJ is a good WR, they still need some help and TJ is 32 years old. The Seahawks signed Colin Cole and as mentioned, traded for Cory Redding. Recently the news is that Redding will lose some weight and play DE on first and second round and then move down to defensive tackle on passing downs. You build successful teams from the inside out and BJ Raji is the best defensive tackle on the board, so should Seattle take him?

I think that injuries hit the Seahawks hard last year on offense. It's tough to plan for injuries, but the fact remains that the Seahawks still need weapons on offense. The quick, pressure defense that Seattle deploys will be helped immensely by the offense actually being able to score some points. So with all that, and even with the injury questions which I think are not that bid of a deal, the Seahawks select Michael Crabtree, WR, Texas Tech.

Many thanks to our very own KDean75 for submitting this pick. The Browns and Cardinal_Fang are next on the clock (e-mail to revengeofthebirds@gmail.com), with the Bengals and LACardsfan on deck. If anyone needs to refresh their memory on the draft order, check it here.

Strengths - He's got excellent hands, uses body well to shield off defenders and is a  hard worker. He's remained coachable while at Texas Tech and has good agility, excellent leaping ability and well adjusts to the ball in flight. To top it off he's an excellent route runner and separates well.

Weaknesses - He more quick than fast and is a bit of a long strider. He needs to get stronger and must work on his blocking.