Are the Arizona Cardinals Finished with Free Agency?

Share All sharing options for: Are the Arizona Cardinals Finished with Free Agency?

The free agent crop is thinning and the Arizona Cardinals took their one big bite when they signed Bryant McFadden and one small nibble by signing Jason Wright. The ranks thin each day as more guys are signed, but for a team with as many needs as the Cardinals there are still some usable pieces out there. The franchise has plenty of money under the cap (they could open up even more cap space by extending Karlos Dansby or Adrian Wilson!) but will there be room on the roster? Darren Urban had a breakdown of the roster a week ago with the idea that roster spots could already be at a premium. With the signing of Clark Haggans today, the Cardinals have 61 players under contract. Urban remains pretty sure that Bertrand Berry will be re-signed and that Edge will be released so that shouldn't affect the number of players on the roster. When you add in the eight draft picks and ten or twelve undrafted free agents, the number nears the maximum of 80 (this is the time of year that the NFL Europa roster exemptions are missed most). 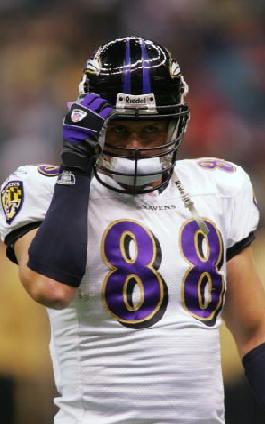 signed including traditional "practice bodies" running back Chris Vincent, wide receiver Ornea Jones, tight end Alex Shor or punter Waylon Prather. So what free agents out there should or could interest the Cardinals at this point in free agency? Here's some guys that I'm still interested in:

Quinn Sypniewski (TE): The soon to be 27 year old tight end is an above average blocker, as his size (6'6 270)  would suggest. He also caught 34 passes in 2007 (his second season in the league) before tearing his ACL in mini-camps last July. He missed all of the 2008 season and the catch with him is that he's a restricted free agent. The Ravens would have the right to match any offer and it would cost the Cardinals a fifth round pick to sign him, but for those hoping that use a mid to late round pick on tight end, he might be a better option.

Marvel Smith (OT) and Kendall Simmons (OG): I'm not sure either of these guys would be instant starters or even upgrades on the offensive line, but I still can't help but think that Whisenhunt and Grimm are interested. Smith and Simmons were both starters on the Steelers' 2005 Super Bowl team and would certainly add tons of depth and competition to the team. Smith's last two seasons have been cut short by a gimping back and Simmons tore an Achilles last year so both are significant injury risks, but a short one year "prove your healthy" contract wouldn't be all that surprising to me. The longer these two go unsigned the further they're price will drop and the more likely that Whiz makes a call.

Marques Harris (OLB): Harris has been buried under some superb linebackers in San Diego but he didn't excel as a starter last year and he's a bit undersized (6'1 231). Still though he's experienced in a 3-4, young (27 years old) and should be relatively cheap.

Pat Thomas (ILB): Thomas isn't starting material but he could fill the same role as Monty Beisel and he's quite a bit younger (26 years old). Thomas started nine games last season for the Chiefs but after missing four games to injury he didn't get his starting job back. The Chiefs haven't shown any interest in bringing him back but he might be a better fit as an ILB in a 3-4.

Matt Giordano (S): The 26 year old has started a handful of games during his four seasons in Indy, playing both free and strong safety, and he's a solid special teams player. He's got outstanding speed for a safety (sub 4.5) and might be a decent center fielder.

As you can see the free agent pickings are pretty slim. At this point any team still fishing in the free agent waters isn't looking for starters, but instead a decent role player who fits a pressing need (think Bryan Robinson from last off season). The Cardinals still have their own free agents to consider as well:

Bertrand Berry: Everything points to Berry returning to the Cardinals at this point. His age and skill set leaves him best suited as a situational pass rusher at this point in his career but in that role he could still be the teams best rusher.

Ralph Brown: The veteran corner revived his career once he leap-frogged Eric Green and got regular playing time. His size (5'10 185) and age (30) are working against him but he's still probably the best option as the Cardinals fourth corner. I wouldn't be terribly upset to hear if he was re-signed with the thought of trying him out at safety.

Elton Brown: If the Cardinals are looking for a versatile lineman who could be decent spot starter, they probably should look at their very own Elton Brown. The fact that he's still on the market is a sign that no one was willing to throw starting money at him. Many think he's a better or at least very comparible player to Duece Lutui.

The Cardinals roster is filing up fast and the remaining additions may be strictly draft related, but they still have some flexibility if they get the free agent itch. Are any of these free agents worth taking a shot at though? Of the remaining three Cardinals free agents, which would you sign?