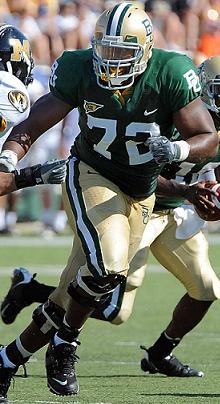 Carson Palmer and the whole Bengals organization just gave everybody at ROTB a big kiss. Carson loves getting Jason Smith.

Positives: Some have said Jason Smith is the best O-lineman in the draft. His athleticism and versatility make him one of the most dominant tackles in the country. He has elite footwork and rarely gets beat off the edge. He is respected and well liked by teammates and coaches. He is a hard worker and very intelligent. As a sophomore Jason moved from tight end to offensive tackle meaning he's not only still a work in progress but that his ceiling is extremely high.

Negatives: Smith has a slender build and needs to show more consistency in run blocking. He does a great job of stopping his man on run plays, but rarely drives him off the ball. He'll have to add some weight to his frame and some are concerned that he didn't play in a pro style offense at Baylor.

Why the Bengals will draft him: With Levi Jones future in question they need Jason Smith. He can be a starter right away. The move from a starting offensive skill position, (TE) to the unglamorous offensive line, shows his trust in coaches and commitment to his team. That is something the Bengals need as much as Jason Smith watching Carson's blind side.

Many thanks to our very own LACardsfan for submitting this pick. The Raiders and ianbbc02 are now on the clock (e-mail to revengeofthebirds@gmail.com), with the Jaguars and AZCARDS66 on deck. If anyone needs to refresh their memory on the draft order, check it here.