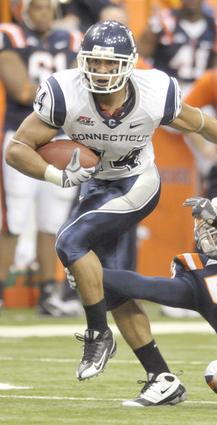 Positives: Brown is the definition of a work-horse. He is also one of the few multi-purpose backs in the draft. He has a good size and speed for a running back. Will hit the hole quickly and makes some exceptional cuts. Runs very elusive and will often confuse defenders. He has surprising speed once he hits the second level and can carry smaller defenders. Has ideal, soft hands for a running back. Secures the ball and tucks it away before running with it. He rarely drops passes. Has decent pass protection as well. Brown had a very impressive combine.

Negatives: Donald Brown may not have the perfect size that the NFL scouts prefer and doesn't have a large upper body frame. Isn't necessarily a bull runner and may not fight off tackles as well as others. His production in college could be the result of a good offensive line, and that may have some scouts concerned. He doesn't pass-block as well as other backs.

Overview: While Brown's skills don't stand out compared to other backs in the draft, there's nothing he can't do. He's a very versatile player who can serve multiple purposes as a back. He led the nation with over 2,000 yards and is as durable as they come.

Why he should be a Cardinal: Brown should be a Cardinal because he would bring a solid, efficient running game to the team. He can serve more then one purpose and would fill the void that Edgerrin James would leave. He doesn't have any character issues and is the type of player that the Cardinals organization prefers. The Cardinals were also one of the few teams that interviewed him at the combine and he is projected to be taken around the Cardinals pick.

How he fits into the offense: Brown would serve as a dependable back-up to Tim Hightower. He is a capable runner and would be able to carry the load if for any reason Tim Hightower was unable to. Brown has great hands and would be on the receiving end of many Kurt Warner passes.