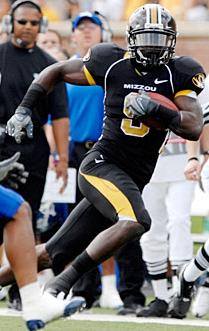 think they will go WR. I've seen some mocks that have the Raiders taking Maclin over Crabtree which i think is dumb and i live in Missouri. The case has been made that the Raiders defense isn't really in need of a DT if the offense could just stay on the field. When the defense is on the field the whole day it takes something out of those big guys. Their leading receiver last year had 22 receptions which is crazy. Maclin is also considered the best return man in the draft. We all know what Al Davis thinks about field position with all his good punters.

Positives: Maclin's got explosive athleticism allowing to him beat defenders deep with his speed and making him ultra-elusive in the open field. His quickness makes it hard for defenders to jam him at the line of scrimmage and he's got very good hands allowing him to bring down even the most difficult catches. He's also the best return specialist in the draft and will contribute immediately in that aspect.

Negatives: Playing in a spread offense means that he's not a polished route runner and wasn't asked to block very much. His height also hurts him in the red zone and he's not a very physical receiver. While he can elude defenders, he won't break tackles once a defender latches on to him. He will drop the occasional pass when he tries to run before securing the ball.

Overall: Maclin's arguably the most dynamic player in this draft and could very well end up being the most productive rookie thanks to his ability to star in the return game. He'll have to work on the finer points of his game as a reciever but he's got the physical tools to have a very long career.

Many thanks to our very own ianbbc02 for submitting this pick. The Jaguars and AZCARDS66 are now on the clock (e-mail to revengeofthebirds@gmail.com), with the Packers and jallred350 on deck. If anyone needs to refresh their memory on the draft order, check it here.