The Jaguars need a wide receiver. If the season started today, the Jaguars would start Mike Walker, Troy Williamson, and Dennis Northcutt. With both Crabtree and Maclin gone, this is the worst case scenario for the Jaguars. The next best wide receiver is Percy Harvin, but he's not a pure wide receiver and the Jaguars already have a running back with speed and hands. 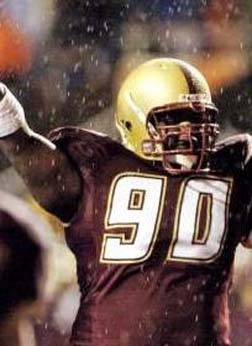 After signing the ancient Tre Thomas to play left tackle and given that the Jaguars will likely draft a center and/or a guard in the later rounds, the Jaguars next greatest need is defensive line. Jack Del Rio still believes you win games by running the ball and stopping the run. When Jacksonville had both Marcus Stroud and John Henderson they consistently ranked in the top of the league at stopping the run. Accordingly, with this pick the Jaguars attempt to fill the huge hole they created by trading Marcus Stroud to Buffalo last year. The Jaguars select: B.J. Raji.

Strengths: At 6-1 330lbs, Raji is a dominant force in the middle. Last year, Raji led a Boston College defense that was ranked #1 in the ACC in total yards against and #1 in the ACC in rushing yards against. Raji excels against both the run and pass. Last year, he totaled 16 tackles for a loss, with 7 sacks. Raji makes quick work of opposing centers and is seen as a two-gap tackle in the NFL. He is capable of playing nose tackle in a 3-4, and with Jacksonville incorporating more 3-4 principles into its defense this year Raji is the ideal pick here.

Weakness: Raji has struggled with weight. His junior year he weighed over 350lbs. His weight will be a constant battle for him in the NFL. In college, Raji relied nearly exclusively on his bull rush to drive back the opposing center or guard. At the next level, offensive lineman will not be so easily dominated, and Raji will need to expand his arsenal. But Raji's biggest weakness is that he cannot fix the Jaguars' problems at wide receiver, which they now have to fill by signing Tory Holt or drafting Heyward-Bay, Hakeem Nicks, Brian Robiskie, Kenny Britt, or Louis Murphy (most likely) in the second round.

If the Jaguars are forced to make this pick after Maclin and Crabtree are off the board, they may try and move down and to draft either Percy Harvin or Heyward-Bay. Also, the Jaguars are rumored to be in discussions to trade this pick and John Henderson to the Lions for Calvin Johnson. If this is an option, and I doubt it is, the Jaguars would be stupid not to make the deal. Barring a draft day trade, Raji fills a need and he is a top 10 player in this year's draft.

Many thanks to our very own AZCARDS66 for submitting this pick. The Packers and jallred350 and are now on the clock (e-mail to revengeofthebirds@gmail.com), with the Niners and bcloirao on deck. If anyone needs to refresh their memory on the draft order, check it here.