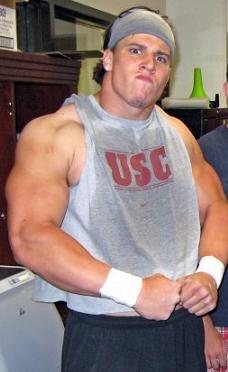 caliber talent. He has a good combination of size and speed and is thought to be a very instinctual player. The only down side here is a history of injuries. If he can stay healthy he would be a great addition to a Packers defense that's transitioning to a 3-4.

Positives: Cushing's got ideal size and near-elite athleticism as evidence by him being a top performer (top ten) in six different drills at the Combine this year. He's also extremely versatile and could realistically play any of the four linebacker positions in a 3-4. He's a capable pass rusher because of his speed and he's able to shed blocks and be a factor in the running game. A highly physical player who's a punishing tackler and likes to intimidate opponents.

Negatives: Many label him as a "maxed out" player meaning that's he as big and athletic as he's ever going to be and that really limits his upside. He's known to spend thousands of dollars on supplements and his durability is another question mark. Over the past four seasons he's struggled with injuries to his shoulder, knee, ankle and hamstring over the past four seasons. He's also a somewhat limited pass rusher who relies mostly on his speed rather than moves.

Overall: Cushing will probably help a team from day one but as listed above, his upside is limited. He's got the talent to start but injuries will always be a concern. His versatility will be appealing to teams like the Packers who have multiple holes to fill in their front seven. For all of the questions surrounding Cushing he's too much of a physical talent to slip.

Many thanks to our very own jallred350 for submitting this pick. The Niners and bcloirao are now on the clock (e-mail to revengeofthebirds@gmail.com), with the Bills and Bezekira on deck. If anyone needs to refresh their memory on the draft order, check it here.