We are now in full swing of the Cardinals off-season, and it can get pretty slow. The season, the playoffs, and the Super Bowl have all passed. Draft-talk is the main subject around here for right now, so we'll move on to something more interesting. A fellow reader put together his own All-Cardinal team a couple months back, but we'll feature a more in depth look at each position. This is going to go back through out the Cardinals history and take the most talented and significant players to have ever played for the Cardinals franchise. The list will surely feature several players from this years team (seeing as they made the Super Bowl and all). We'll address the offensive side of the ball, defensive, and then coaches and special teams. So to begin our off season segment of the all time team, we'll start with the Quarterbacks. Here is the list to vote for:

Keep in mind, all the stats are when the player was a member of the Cardinals. 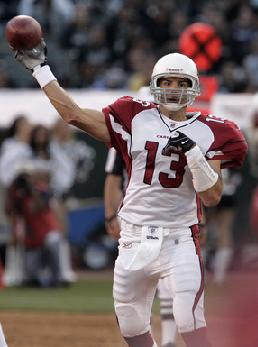 Analysis: The old grey beard came to the Cardinals as a back-up or if anything, he was brought here to fill in until the Cardinals could draft their future QB. Instead, Warner's been able to rewind the hands of time, and obviously has put together the best couple of seasons ever for a Cardinals quarterback. The fact that he already owns most of the franchise records, either says quite a bit about his four seasons in Arizona, or the lack of quality play for the past 50 years from former quarterbacks. Warner's resume has one huge trump card over all other Cardinals quarterbacks though; he's the franchise leader in playoff wins and is obviously the only one to lead the team to a Super Bowl. With another amazing season or two, Warner may end all debate about who the greatest Cardinal

quarterback is, but for right now he's just in the conversation.

Analysis: Hart is arguably the most successful Cardinals' quarterback, leading the Red Birds to a 31-11 record during the Cardiac Cards era of '74-'76. His skills allowed "Air" Coryell to put his stamp on the NFL football playbook and got the Cardinals to the playoffs in back-to-back years for only the second time. Hart was a classic pocket passer that utilized his All-Pro line that included Hall of Famer Dan Dierdorf, to keep the first downs coming.

Analysis: Lomax was a stud, capable of throwing lasers all over the field, or scrambling for needed yards to keep the down markers moving. His QB rating ranks among the best for a long-tenured Cardinal. Sadly, Lomax's full potential was never realized due to injuries and the Cardinal's defense plain stinking-it-up. To sum it up, the '80's Cardinals were an Arena Football franchise before there was an Arena League. Neil still holds the Cardinals' single-season record of 4,614 yards, but he couldn't carry the team alone. He only made the playoffs once during the strike-shortened '82 season, and nearly got the Cardinals to the post-season in '84...but that memory is still painful. 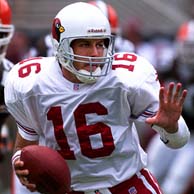 Analysis: Jake Plummer was the face of the 90's Cardinals after a succession of one-season has-beens or coulda-beens (Kreig, Esiason, Graham, etc.). While his stats were not very impressive, his scrambling ability and boot-leg passes seemed to keep the Cardinals in games when all seemed lost. It was upon these legs that the Cardinals' '98 playoff appearance solely lie, as late scrambles against the Saints and Chargers were the sole reason Chris Jacke was sneaking field goals over the crossbar. He also might have engineered the franchises' biggest win, prior to the 1998 season, when he went into Dallas and beat the vaunted Cowboys. Coming from Arizona State made him a fan favorite and drew a lot of new fans to the team (him and Jerry McGuire boosted female fans by 200% alone!). He never finished a season with a QB rating over 80, threw for 24 more interceptions than TDs, and led his teams to a 30-52 record (although the quality of talent around him was never anything to brag about). For all his "bonehead" moments, Jake had an incredible throw and that truly makes him one of the best Cardinals QBs ever.

Analysis: With the Cardinals throughout the '60's, Johnson led the Red Birds to their first run of consistent winning seasons since the Million Dollar Backfield days, as the Cards posted 9-5 and 9-3-2 records in '63 and '64. Prone to throw as many interceptions as touchdowns, it was Johnson's ability to take those chances that made the Cardinals a fun team to watch in St. Louis after the dismal '50's. He was 36-28-5 as the Cardinals' starter before injuries allowed Jim Hart a chance to shine. Johnson incidentally, is in the Broncos' Ring of Honor for his contributions to the long suffering franchise in the '70's. Not bad for a 10th Round pick out of New Mexico St.

These are the candidates for the Arizona Cardinals All-Time quarterbacks. Depending on how many votes they get, the top two vote getters will be added to the all-time team. Did we leave anybody off? Who do you think is the all-time Cardinals quarterback?