While the 49ers have a huge need at OT, I think because the top tackles are gone at this point, they'll take the safe route (meaning no Andre Smith), and will take the next best player off the board 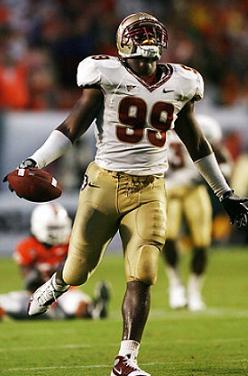 (which means they won't reach for Oher or Britton). The 49ers have excellent pieces on defense, but suffered with a weak pass rush. Patrick Willis is an animal in the middle, but doesn't put much pressure on the QB. Brown is a strong pass rusher, and would be a great compliment to Willis.

Also--I will be extremely surprised if they take a QB with this pick. I REALLY don't think that's going to happen, especially with Alex Smith resigning, and everyone being pretty high on Hill in case Smith can't get it done.

Positives: Great athlete with an explosive first step and a good repertoire of pass rush moves. He's a natural pass rusher and uses his hands well to beat offensive tackles. He did play with his hand off the ground at Florida State and moved all over the formation to create mismatches so he's got the versatility to line up at multiple positions. He's a powerful tackle who can knock the ball loose and he can chase plays down from behind.

Negatives: He's a bit of a ‘tweener' and would make a big OLB but a small DE and he's not as tall as you'd expect for an OLB. He can be a liability against the run, especially when double teamed. His frame is close to ‘maxed out' but he'll have to get stronger to be an every down player. He'll also have to get better instincts instead of just being a pass rusher.

Overall: Brown's early contributions will be as a situational pass rusher but he's got the athleticism to be very good. FSU linebackers haven't had much success in the NFL in recent years but Brown could be the talent to change that trend.

Many thanks to our very own bcloirao for submitting this pick. The Bills and Bezekira are now on the clock (e-mail to revengeofthebirds@gmail.com), with the  Broncos and AJBirdWatcher on deck. If anyone needs to refresh their memory on the draft order, check it here....