Positives: Alex Mack is the best center that will be in the draft and will fill a huge hole on any offensive line. Mack is not an explosive center, but he does get to blocks quickly. He is very consistent at both pass and run protection. He pl 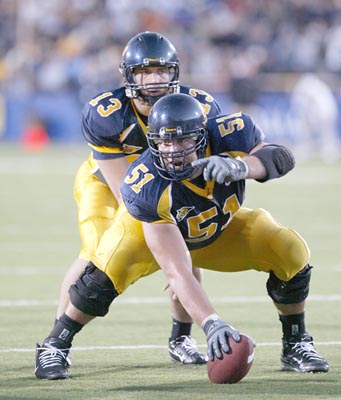 ays with a low center of gravity, and shows the proper form when blocking. He doesn't hesitate to put a defender on his back, and won't stop till the whistle blows. He has great hand and feet movement, and will often drive defenders backwards. He is a great guy off the field and is the ideal player for a team, but turns into a beast when on the field. He will often take command of the line and call plays as he sees them. He has great work ethic, and strives to become stronger. In college, he would often stay late in the weight room and as a result, became one of the strongest players on the team. He is very smart and won several academic awards in college.

Negatives: The number one complaint about Mack was that he spent too much time on the ground. He has trouble adjusting position, and will sometimes stumble or fall. Most think that he's a bit small or an offensive lineman, and as a result, got toppled over too many times. Others think he was just a mauler and did whatever he could to block a defender. Another weakness to Mack is that he's not a very fast center, and struggles with lateral movement. For being a powerful center, he only recorded 20 bench reps at his pro day. He uses his body too much to lean into defenders, and that often results in being beat by double moves. While Mack is solid as a pass protector, he may struggle with the bigger defensive tackles in the NFL. He sometimes gets lost in the defense when trying to make a block at the second level.

Overview: Regardless of whether he stumbles or not, Mack will become the anchor of the line for whoever drafts him. He works hard in the weight room and is always trying to improve his skills. Once he polishes certain aspects of his game, he will be able to start for a team if they needed him too.

Why he should be an Arizona Cardinal...

Why he should be a Cardinal: Mack should be an Arizona Cardinal because he would stabilize the offensive line. Lyle Sendlein was solid in 2008 but never dominated. He wasn't strong in the run game, and was an average pass blocker. Mack would be able to come in and improve both aspects of the offense. Aside from the football side of it, Mack is a genuine guy and fits into the character of this team.

How he would fit into the offense: Mack would start at the center position and would be one of the main points of the line for the next few years. He would protect Warner and rarely give up a sack. He excels at screen blocking, which the Cardinals tend to do with both receivers and backs.

I was hoping that most of my work would be done at the combine, and I’m frustrated that I wasn’t able to do that. But I’m on my home turf, and I’ve put in the work, and I’m confident it’s all good. It’s a big day, but it’s not going to make or break me. Unless, you know, I completely fall on my face and can’t get up.