Depending on what happens in the next month with Jay Cutler, Denver might be tempted to go another USC prospect, Mark Sanchez. First time Head Coach Josh McDaniels however, has already shown that he would rather place emphasis on the team over a potential "face of the franchise" type of guy. No matter what happens at the quarterback position though, it is without question that the Denver Broncos will not compete without serious help on the interior front seven. 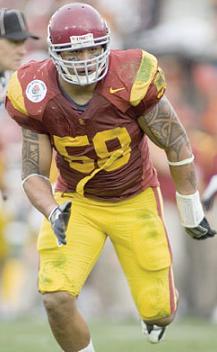 per game. A major contributing factor to that stat was an atrocious run defense that gave up over 146 yards per contest. Denver would be most happy with a run stuffing DT such a Raji, but with him off the board, as well as defensive ends Brown and Maybin taken in the previous two picks, they may settle for another defensive need at Middle Linebacker. Maualuga could definitely make an impact at this position in the first year with his combination of speed and strength. He's a versatile 3 down backer that can chase down a back on the outside or punish them between the tackles.

Positives: Maualuga's got the perfect size and bulk for a middle linebacker in the NFL and has a very physical style of play. He's good at getting off blocks and an explosive burst to close on a ball carrier and the strength to deliver a monster hit. Blitzing not his strong suit but he does it better than most inside backers and has the lateral quickness to catch even mobile quarterbacks.

Negatives: Each of his strengths seem to coincide with his weaknesses. His ideal size leads to a lack of elite timed speed. His physical, agressive play will lead to him over running plays at times and he'll miss a tackle every once in a while when he tries to deliver a knockout blow. The biggest question mark on him though remains to be his ability to perform in coverage. His hips are a bit stiff and some question his ability to be a three down linebacker.

Overall: Maualuga is the best inside linebacker in the draft bar none. He's got the size, athleticism and production to translate to NFL success and he'll improve whatever defense he steps into. He's a highly talented player who still have significant upside.

Many thanks to our very own AJBirdWatcher for submitting this pick. The Redskins and DBacksskins are now on the clock (e-mail to revengeofthebirds@gmail.com), with the Saints and Boogatt66 on deck. If anyone needs to refresh their memory on the draft order, check it here....