Do the Arizona Cardinals Still Need to Target an OLB Early in the Draft?

Share All sharing options for: Do the Arizona Cardinals Still Need to Target an OLB Early in the Draft?

Earlier in the off season we identified the need for an outside linebacker as the second biggest need for the Arizona Cardinals, coming in a distant second to running back. Given the Cardinals lack of pass rush during the second half of the season and the uncertain status of Bertrand Berry and Clark Haggans, that seemed like a legit weakness. Since then both Berry and Haggans have been re-signed leaving the RedBirds two deep at both outside backer positions. So the question remains, should the Cardinals still be targeting an OLB early in the draft?

OLB is still a significant need: The Cardinals entered last season with a question mark at outside linebacker because they had a couple accomplished veteran pass rushers who had very little experience playing with their hand off the ground (Berry 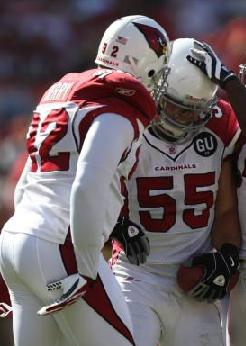 and Okeafor). They also signed another former defensive end with the idea of transitioning him to an outside linebacker (LaBoy). The results though were mixed at best. Those three guys registered about half of the Cardinals sacks on the season and overall the team ranked 14 in terms of sacks. Berry and Okeafor are now and year older and LaBoy has yet to prove that he can stay healthy over a full season. Clark Haggans is the only player on the depth chart with significant experience as an OLB in the 3-4 and his skills are best suited to dropping back in coverage. All of that adds up to a line backing corps that will struggle to pressure the quarterback yet again and to be a dominant 3-4 defense, the pass rush must come from the outside linebackers.

OLB can wait until next year: The Cardinals linebackers have shown the ability to pressure the quarterback and when they're healthy, they are a capable unit. Travis Laboy registered four sacks in the first five games before being hampered by injuries for the remainder of the season. Bertrand Berry remains an effective pass rusher and he shouldn't have any problem picking up a handful of sacks or more in 2009 and Chike Okeafor should be more comfortable with his new role in his second season. The Cardinals have more pressing needs like improving the running game (both RB and OL) and safety depth that should be addressed before looking for a pass rusher. Berry and Okeafor will be free agents after this season and they can look to draft an outside backer late in this draft or very early in the draft next season.

This should be an interesting draft for the Cardinals considering that they've never picked this late in the draft. There are certain needs that have to be addressed but should they target an OLB early in the draft? If you're looking for a OLB in round one or two, who do you pick?