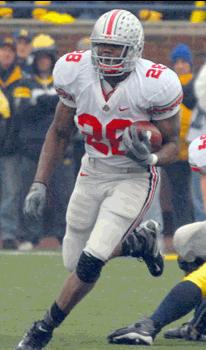 Positives: Wells is your ideal, large downhill runner. He has the perfect size( Upper body, arms, legs, shoulders), and speed to be dominant runner in the NFL. He has great vision and is able to burst through holes at ease. He runs through tackles with a force, and carries defenders with him. Once in the second level, he becomes even harder to bring down. He usually wins a challenge, and adds extra yardage after the first hit. Arm and leg tackles rarely bring him down. Most defenders have trouble with him because of his speed and elusiveness as well. Although he is a bull runner, he can hit the burners in the secondary, and makes more then one cut at a time. Wells is also a smart, patient player, who will adjust to new plays and formations. Wells has good leg drive, and has the best stiff arm in the draft.

Projected Round: 1st Round

Why he should be a Cardinal...

Why he should be a Cardinal: Like all the other running backs in the draft, Wells should be a Cardinal because he would immediately improve the running game. He has great explosiveness, and would be exactly what the Cardinals need to make their offense the best in the league. He has a personality that other players like, and has no character issues. He and Hightower would become a powerful 1-2 punch, and would wear out defenses.

How he would fit into the offense: Wells would become the 2nd string back behind Hightower, but would get a considerable amount of playing time. He would be used in short-yardage, and goal-line situations. When the Cardinals start beating opposing defenses through the air, Wells could be used to drain the clock and keep the ball moving, as Whisenhunt likes to do.