The Redskins were hoping against hope that Orakpo would fall here, but no such luck. Their need at SLB remains, but after signing high-priced Albert Haynesworth 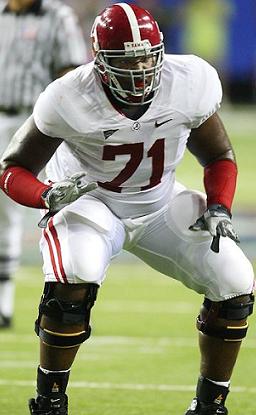 for the defense, they'll bite the bullet and take troubled Alabama Offensive Tackle Andre Smith at #13. "Ironman" Jon Jansen, the longest-serving Redskin, has had serious issues with keeping healthy over the past few years but also in pass protection, and in the Redskins' new West Coast Offense, pass protection outweighs vicious run blocking. Chris Samuels is still the best Redskins offensive lineman, but isn't nearly as good as his reputation. At guard, the 'Skins replaced Free Agent and former Cardinal Pete Kendall by bringing Derrick Dockery back to DC, so their biggest weakness remains at tackle.

Positives: Voted "Mr. Football" during his High School career in the state of Alabama, Smith has massive size and a prototypical wingspan, and has more than proven his abilities in real game situations with talent, athleticism and good footwork. He'll be a star pupil for legendary line coach Joe Bugel.

Negatives: Smith's off-field troubles have been well-documented. He was suspended from the Alabama football team and prevented from playing in this year's Sugar Bowl for illegal contact with an agent. He reported to the NFL Combine overweight, he dressed inappropriately and bombed his interviews, and he put up a disappointing 19 reps on the bench press. Making things worse, he decided to leave the Combine early without informing anyone. Smith was only slightly more impressive at Alabama's Pro Day, and had lost 7lbs. What the kid doesn't seem to understand is that he cost himself millions of dollars in likely slipping from the 1st third of the draft into the 2nd or even 3rd.

Verdict: The Redskins have shied away from players with spotty reputations off the field in recent years, but Smith's troubles will allow him to fall to the #13 pick, where he's far and away too good a talent to pass up. Smith goes at #13 and starts at Right Tackle in 2009.

Many thanks to our very own DBacksSkins for submitting this pick. The Saints and Boogatt66 are now on the clock (e-mail to revengeofthebirds@gmail.com), with the Texans and Red Reign on deck. If anyone needs to refresh their memory on the draft order, check it here....