The Bears have quite a few holes, in no particular order: WR, OT, DE, QB, S, CB, C, G. That's a lot of holes, but for the first round, it comes down to OT, WR, and DE. Plus Jerry Angelo thinks Kyle Orton is the best quarterback in the division. Ideally, I think a trade down is the Bears best option, but we're not doing that.

The Bears will have their first round pick from last year, Chris 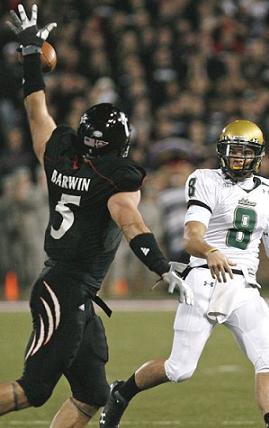 Williams at left tackle. However, due to back problems, he didn't play at all last year. The man that did play left tackle last year was John St. Clair. While he was serviceable, he's more of a swing tackle or right tackle. Cleveland signed the free agent St. Clair and in retribution, the Bears signed ex-Brown Kevin Shaffer to play right tackle as last year's right tackle, John Tait, retired. Apparently he's a better run blocker than pass blocker which is good since the Bears are a run first offense. I admittedly don't know a lot about Shaffer, but Cleveland was not good running the ball last year, so signing Shaffer and counting on what is basically a rookie left tackle doesn't seem ideal. With the earlier picks of Oher, J. Smith, A. Smith, and Monroe, the next best tackle is Eben Britton from Arizona, but he would be an overdraft at this position so look for the Bears to use a 2nd or 3rd round pick on a tackle, but not now.

Wide receiver is an absolute glaring hole for the Bears. Last year they drafted Earl Bennett out of Vanderbilt as a possession, smart type of receiver, the opposite of Devin Hester. However, Bennett wasn't even active most of the year as he had a difficult time picking up the offense, which is a bit disconcerting. Hakeem Nicks and Brian Robiskie are ideal fits with Devin Hester as a starting receiver as they are pro-style receivers that are more physical, possession receivers. However, they're not necessarily good values here in terms of drafting. Apparently, Heyward-Bey was brought in by the Bears this week, but he was just selected. The other intriguing option is Kenny Britt from Rutgers. He was one of the top WR prospects coming out of high school and played all 4 years at Rutgers. He's tall and fast with good hands. However, Rutgers wasn't much of a passing team and he had some marginal at best quarterbacks. There are just too many questions with these receivers and none of them could even fit the best player available label. The Bears might overdraft a guy like Robiskie, but that's not what Jerry Angelo has ever done.

The Bears had 12 sacks from their defensive ends last year and 28 sacks as a team. While in 2007 they had 18 defensive end sacks and 43 as a team. Due to the Bears being a Cover-2 defense, they have to generate a consistent pass rush from their front four. That was clearly lacking last year as the starting defensive ends for the Bears are Adewale Ogunleye, who is 31 years old, and Alex Brown who is 29 years old. Combining the drop in sacks and the increasing age of the defensive ends, the Bears have to update their ends. Unfortunately, the available ends don't seem to fit what the Bears need. Larry English might be better suited as an OLB in a 3-4, Robert Ayers is better suited as a run stopping end or as a tackle in a 3-4, and Tyson Jackson might also be better as a run stopper. Two players that are intriguing and shooting up draft boards are Connor Barwin and Jarron Gilbert due to their combine/pro day speed/power numbers. The Bears pride themselves on their defense, and they were not one of the better defensive teams last year. The Bears take a guy that I'm sure is an overdraft, but has some seriously impressive numbers, Connor Barwin. 6'4", 250 lbs., 4.5 sec 40 time, 23 reps at 225 lbs. with a 10 yard split time of 1.57 seconds. He has a non-stop motor and is relentless to the QB. Excellent football knowledge and team player as he was a tight end most of his collegiate career. That leads to his main negative being that his a bit inexperienced as a defensive player. As a result, he must improve his technique.

Many thanks to our very own KDean75 for submitting this pick along with an excellent writeup. The Bucs and hevchv are now on the clock (e-mail to revengeofthebirds@gmail.com), with the Lions and Andrew602 on deck. If anyone needs to refresh their memory on the draft order, check it here....