I'd like to start by giving a big thanks for everybody who voted in our first all-Cardinal poll for quarterbacks. Amazingly, we had over 500 votes with Kurt Warner taking over 300 of them. That's a genuine consensus that he is the greatest quarterback in Arizona Cardinals history. In only a couple seasons as a Cardinals starter, he gained the respect and attention of the fans. He will be listed as the all-time Cardinal quarterback, along with Jim Hart as the back up for his considerable amount of votes as well. A quarterback though, can't have great numbers without a great wide receiver...which brings us to the next position. The past few seasons have been highlighted by wide receivers with the likes of Fitzgerald, Boldin, Bryant Johnson, Steve Breaston, etc. Before them however, were some other wide outs that put their names in the Cardinal's record books. Here are the candidates for the all-time Cardinals wide receivers:

Analysis: Larry Fitzgerald is still too young to have climbed up the franchise's leader board in most receiving categories, but he's already cemented himself into Cardinals lore by posting the best post-season in NFL history. He set all major post season records for a receiver, and anytime you break a record of Jerry Rice, you're something special. The Cardinals drafted Fitzgerald high, and he was expected to impact the receiving game immediately. He did just that and a little more as he is regarded as the best receiver in the NFL. Fitzgerald has stated that he wants to go down as the greatest wide receiver in Cardinals history, and that may happen as his receptions and yards per game are top three in franchise history, and if he plays here long enough he'll own every possible receiving record in the books. 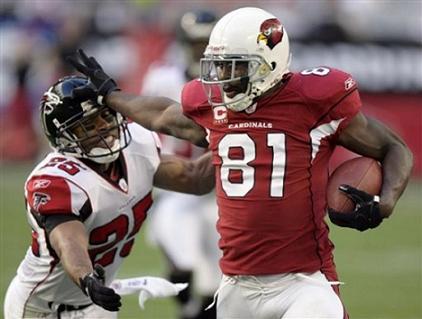 Analysis: Boldin is possibly the most dominant receiver the Cardinals have ever had play for them. He reached 500 catches faster then any receiver in Cardinals history, and may keep that going if he stays on the team. Drafted in the 2nd round behind 1st-round pick, Bryant Johnson, nobody expected much from him. He jumped on the scene in his first ever game recording 10 catches for 217 yards and 2 TDs. Since then, he's been a steady force on offense, and one of the most exciting players to watch. 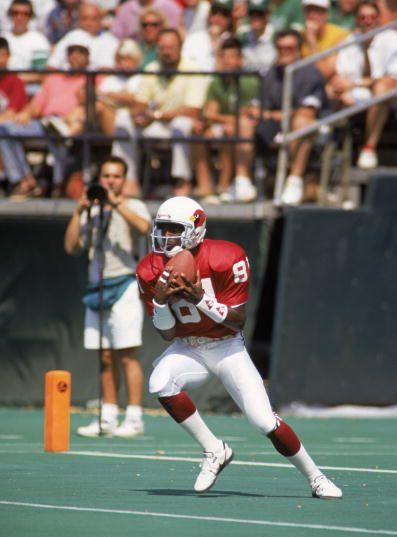 Analysis: Green played in more Cardinals games than any receiver and he's got the stats to prove it. Most of his team records (yards and TDs) will fall in the next couple of seasons but he was a two time Pro Bowl and two time All-Pro in '83 and '84. It's a shame the leader in most Arizona Cardinal receiving stats isn't as popular as he should be. The fact that he was able to put up the numbers that he has should be proof enough that he was a great wide receiver.

Analysis: Tiley's a name that's going to get pushed further down the leader board in the next couple of seasons but his service to the Cardinals shouldn't be forgotten. He played his entire eleven-year career with the Cardinals and was voted to a Pro Bowl in 1980.

Analysis: Gray, originally a 6th round draft pick, was a receiver that the Cardinals could depend on. He played in 4 straight pro bowls and caught passes in 121 consecutive games in a 9-year span. Gray was Tiley's team mate for several years and even though he never totaled over 1,000 yards, he a bona-fide deep threat who averaged 18.9 yards per reception for his career and was voted to four pro bowls and one All-Pro team.

Analysis: Randle didn't let his 19th round draft status keep him from leading the league in touchdowns receptions in just his second season with 15. That's a pretty amazing number for 1960, especially considering that he only played in 12 games. He'd play for the Cardinals for eight seasons and would total over 5,400 yards and 60 touchdowns (16.6 yards per reception). At the time of his retirement he was the Cardinals' leader in single-season and career receiving yardage and touchdown receptions and he's still has the team record for most receptions in a game with 16 (set in 1962). Randle was a four time Pro Bowler and was selected to one All-Pro team. Since his retirement, Randle has held the head coaching spot at East Carolina, Virginia and Marshall. 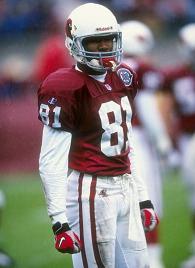 Analysis: Frank Sanders wasn't the biggest receiver and didn't make the biggest plays, evidence being his TD total. But he was however, a solid/dependable receiver. Sanders is the beneficiary of playing nearly his entire career for bad franchise. He never caught more than six touchdowns in a season and averaged just 3 per year for his time in AZ. If he were on any other team, he probably wouldn't even be mentioned.