I originally became happy when I noticed that Beanie Wells and Knowshon Moreno were still available, but the Lions are deep at the running back position with 6 active running backs on the roster. Maurice Morris and Kevin Smith are solid enough to be productive backs in 2009 and if needed, they can take a back later in the draft. When it all comes down to it, the Lions were 0-16 last year and have more holes on the team then Swiss cheese. 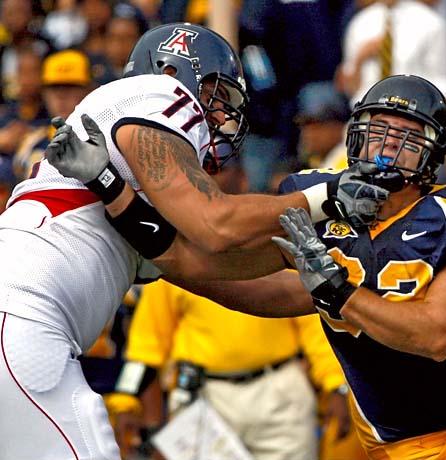 Positives: Eben Britton is a huge tackle that can play on both ends of the line. He is all lean-muscle, and he can add a few pounds if needed. He is tall and has a long wingspan, which he likes to use to his advantage. Britton is a very quick tackle who has no problem getting in position for quicker defenders. He has great balance and a low center of gravity. He is also a capable blocker at the second level, and doesn't quit till the play is dead. Britton dominates at pass protection with his quickness and size, and run protection because he towers over defenders. He likes to use his speed to get to a defender and often grabs them by their pads and drives them back. He rarely makes mental errors and uses his intelligence often when on the field. He's a great leader and has an ideal personality. Eben plays with a mean streak and will not hesitate to look for defenders to knock over. He will take in everything a coach teaches him and he has a strong work ethic.

Negatives: While Britton is such a dominant lineman, he's lacking in other aspects of his game. He isn't the most explosive lineman and may get beat by quicker defenders. If he gets stuck an island, he may struggle and may need some support from a tight end or a chip block. He doesn't have the overall lateral quickness to get to the outside, and could have trouble with blitzing defensive backs. He needs to improve his hip flexibility and may struggle when changing directions as well.

Why the Lions will draft him: The Lions need help on the offensive line and as they say, the game is won and lost in the trenches. Britton's presence will allow Jeff Backus to move to the inside of the line, allowing their line to improve from year's. Britton and Gosder Cherilus will become solid, book-ends to the offensive line for years to come. Finally, since they drafted Matthew Stafford with the 1st overall pick, they need a young lineman who can learn and progress with him throughout their careers.

Our normal email address won't be checked through Monday so if you're reading AJBirdwatcher, you're up next with the Philadelphia Eagles with Jallred350 and the Minnesota Vikings on deck. Send your picks to ams602@gmail.com. To refresh your memory of the draft order, click here.