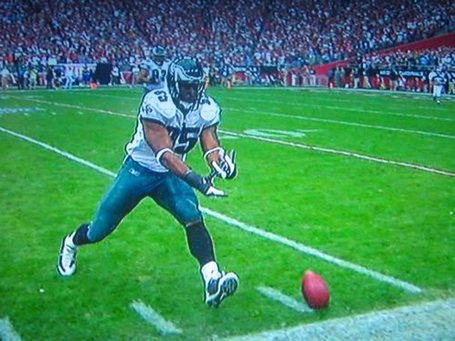 The NFL changed 11 total rules at their annual meeting this past week. One of them being a critical play in the NFC Championship game back in January. Most Cardinal fans will tell you, they haven't forgot. It was the 2nd quarter and the Cardinals were up by an improbable lead of 21-6. Arizona was kicking off to Philadelphia after increasing their lead when the ball took an unfortunate bounce. As you can see, it landed at the 26-yard line and was recovered by a Cardinal before the play was whistled dead. The refs had blown the call, ruling that the ball had bounced out of bounds/touched the player while out of bounds. Philadelphia was given the ball, instead of the Cardinals having great field position. The Cardinals would have had the ideal situation to play for the kill with less then 2 minutes left in the half. Although Eagle fans will say that it touched this players elbow, there's no clear evidence of this and as the ball was bouncing backwards, it never so much as flinched when it passed the player. The rule now states that video replay can be used to determine if a loose ball stayed in bounds or hit the sideline. This will take into affect next year, along with these other 10 new rules: