Victor Hobson and His Future with the Arizona Cardinals

Share All sharing options for: Victor Hobson and His Future with the Arizona Cardinals

In an effort to get a better read on Hobson, we contacted John B, head blogger for Gang Green Nation, our fellow Jets blog. Hobson was a second round pick of the Jets in 2003 and spent his first five seasons as a Jet. He was a full-time starter for the better part of four seasons and even posted 100 tackles and six sacks in 2006, so why was he a 'street free agent' in December?

Hobson played out his rookie contract and despite starting 57 games over his first five seasons, he wasn't retained by the Jets and garnered little interest on the free agent market. The Patriots signed Hobson to a one year deal worth just 605K but he was cut at the end of camp. After being unemployed for most of the season, the Patriots came calling again in early December but he decided instead to sign with the Bengals. After just two weeks with in Cincy, they cut him and shortly thereafter he was picked up by the Cardinals. All in all it was quite a season for the 29 year old backer.

At the start of his career, the Jets were running a 4-3 defense and Hobson made his living as an outside backer, but in 2006, when Eric Mangini took over as head coach, the Jets switched to a 3-4. Hobson moved to an outside 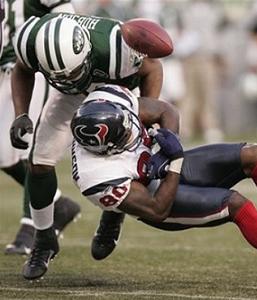 backer position in the new defense and had a career year registering 100 tackles and six sacks, but the success would be short lived. In 2007 he'd register just 62 tackles and two sacks while also losing his starting job late in the season. When the Patriots signed Hobson they moved him to an inside backer in their 3-4 defense and some expected him to start over rookie Jared Mayo. Here's what John B, from Gang Green Nation, had to say about Hobson's days as a Jet:

Hobson was an adequate outside linebacker in Herm Edwards' 4-3 but he really struggled when Mangini came in and the team switched to the 3-4. He played on the outside in the scheme. He is not very athletic and had never played primarily as a pass rusher and did not have many moves as a result. His work in pass coverage was also spotty, and he struggled to get off blocks. His 2006 stats are kind of deceiving. They were empty numbers. He made very few impact plays on a defense that was not very good. While he was nothing special in 2006, his play fell off a ledge last season. The reason the Jets spent so much to bring in Calvin Pace was they realized they needed a major upgrade over Hobson. There was little to no interest in bringing him back.

Hobson won't be a starter for the Cardinals but his experience on the inside and outside could end up being very beneficial on a team that seriously lacks depth in the linebacking corps. If he can prove to be able to understand both positions, he could stick around in Arizona serving as the primary backups at all four backer spots and he'll also be able to contribute on special teams. In the end it'll be nearly impossible to predict what role, if any, Hobson will have next year, or even if he'll make the team, but he's a name to remember during camp.