Kurt Warner Makes an Offer to the Arizona Cardinals

Share All sharing options for: Kurt Warner Makes an Offer to the Arizona Cardinals

Kurt Warner, through his agent, has made an offer to the Arizona Cardinals and it 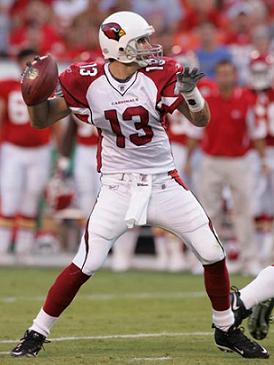 doesn't seem all that crazy. He's lowered his asking price from $28 to $30 million over two years to a much more reasonable number and according to Warner and his agent, it's less than the Niners are offering:

The guaranteed money is split evenly over the two years of the contract which would lower his cap hit (good for the Cardinals) and give him some security in 2010 against the team releasing him (good for KW). But that's not all.....

He'd also give up $1 per season if the team agreed to a new contract with Anquan Boldin.

Ok, so the whole giving up money thing to sign another player may be out of his hands but the bottom line is, this is a reasonable deal (at least the way it's being presented from Warner's people). The Cardinals were first offering two years at $20 million and recently they upped the offer to two years at $23 million, but the added three million was based on incentives (that included reaching the Super Bowl again).

Bottom line, my confidence in Warner's return to the Cardinals was starting to wane, but it's clear that he wants to stay and the Cardinals won the stare-down. He's drastically lowered his asking price and it's time to get this done. Are you ready to get Warner's name on the dotted line? Sound like a fair deal?

Update #1: Ughh...Kent Somers has some more details of the contract and he's suggesting that it's not quite the 'no-brainer' that we originally suggested. Basically the guaranteed money ($12 million) doesn't include the salary in the first year of the contract. That's important because there's zero chance that KW would be cut before the season starts, so the guaranteed money could actually be estimated at $19 million. Is your head spinning yet......yea mine too.