Two new members of the All-Cardinal team have been added in receivers, Larry Fitzgerald, and Roy Green. They took a commanding lead and only Anquan Boldin came close. Moving on from wide receivers, brings us to tight ends. When I started the All-Cardinal team, I wanted it to be a team created by ROTB members. I was considering making the tight end position into a vote, but I realized that there really wouldn't be a point. The Cardinals had one of the greatest tight ends in history during their time in St. Louis and there's never been anyone to come close since. That man is Jackie Smith. Smith was a Cardinal for his entire career until he played in Dallas for his final season. Smit 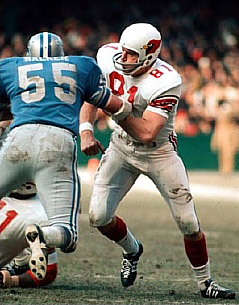 h played 15 seasons with the Cardinals and was the best tight end in their history. He was a dominant threat as a receiver, a punishing run blocker, had a great work ethic, and ran his routes and yards after the catch like no other. He was one of the most dependable players on the team while playing in 121 straight games and 198 overall. He was a dependable receiver as well, because he put together a run of 45 games with at least 1 catch. He was your prototypical hard-nosed tight end. One day the Cardinals may have a tight end who can compare to Jackie, but for now, he's the top-dog.