The Philadelphia Eagles would probably prefer to draft a Franchise offensive tackle here, seeing how last year's starting LT, Tra Thomas, has signed with Jacksonville, and Jon Runyan, the other starter, remains unsigned and recovering from a microfracture knee surgery. With the Lions taking Arizona's Eben Britton with the previous pick however, that means that arguably the best 5 Tackles are off the board at this point, and the Eagles turn to another need at Running Back.

Positives: Moreno is rarely tackled by the first defender and can be elusive to th 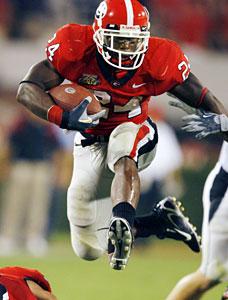 e best of them. He has a very good stiff-arm, and will juke or spin away from many defenders. He will often anticipate where a hole will form and where the blocks will take place. He has great lateral quickness and will often put his shoulder down and carry a pile. He can line up as a wide out and has very good route running skills for a running back. Will crack a blitzing linebacker if needed and provides good pass protection.

Negatives:  Only draw-backs to Moreno are his speed and attitude. He didn't have a good 40-yard dash at the combine and may not have the top-end speed for the NFL. He's not as big as some teams would want in a bruiser-back. He celebrates too much and may draw penalty flags.

Why the Eagles will draft him: After Correll Buckhalter signed a new deal with Denver, Knowshon Moreno, the first back taken in the 2009 NFL Draft, take over as the primary backup to existing starter, Brian Westbrook. This not only fills a void left by Buckhalter, but gives the Eagles a future starting caliber running back to take over the reins from Westbrook, who turns 30 in September. Philadelphia could ease Moreno into the NFL pace at the beginning of the season, but could potentially be splitting carries with Westbrook by November.

Many thanks to our very own AJBirdWatcher for submitting this pick. The Vikings and jallred350 and are now on the clock (e-mail to ams602@gmail.com), with the New England Patriots and Hawk's Wife on deck. If anyone needs to refresh their memory on the draft order, check here.