Coming into the 2008 season, the Vikings were touted by many as one of the top teams in the NFC. The only weakness, and it was a glaring weakness, 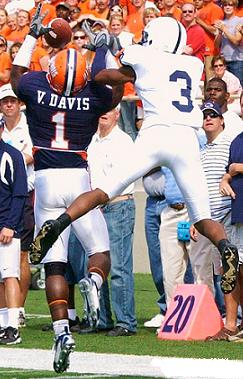 was at QB. This off season the Vikings attempted to address this issue by signing FA Sage Rosenfels. Unfortunately, for Viking fans, this might be too little too late. Currently, the Vikings areas of weakness are at WR (failing to add T.J. Houshmandzadeh to an underwhelming unit), DB (this unit was the weakness of the defense last year, Antoine Winfield is aging and Darren Sharper has left for New Orleans), and OL (the right side of the line has been average at best and Matt Birk was lost to the Ravens during free agency). If Eben Britton was here he would be the pick. William Beatty, OT, of UCONN is a possibility. I think it's too soon to take a center at 22, but Alex Mack, Cal, and Max Unger (some feel he can play several positions on the OL), Oregon are probably in the mix here. Percy Harvin, a poor man's Reggie Bush, would definitely help the team on the edges and as a returner. But his potential would be wasted on a team that has offensive leadership with very little creativity. The pick here is two time all Big Ten CB Vontae Davis of Illinois. Davis a physically strong corner who supports the run well. He also has good speed running a 4.49 at the combine (3 hundredths of a second off of the leader).

Strengths: Davis has a unique blend of size and athletic ability. He's got the bulk to jam even the biggest receivers and the athletic ability to turn and run with even the faster burners. He's got fluid hips and plays the ball very well while it's in the air. He's also excellent in run support and can deliver a knock blow to bigger backs. With plenty of experience on special teams, as a cover man and returner, he'll be able to contribute early in his career.

Weaknesses: He's not the most receptive to coaching and his work ethic was questioned during his time in college. He can be inconsistent at times and some believe he's survived this long on his athletic ability rather than a true understanding of the game or his position. He will gamble too often and doesn't have great hands.

Overall: Vontae's own worst enemy could be his brother, Vernon, considering that he had the same question marks coming out of college. They're both amazing athletes who are still more 'athlete than football player.' Overall he's a 'boom or bust' prospect who's physical talents should make him a top 10 pick but his intangibles seriously hurt his stock.

Many thanks to our very own jallred350 for submitting this pick. The Patriots and My Wife and are now on the clock (e-mail to revengeofthebirds@gmail.com), with the Falcons and CardsFan08 on deck. If anyone needs to refresh their memory on the draft order, check here.