The Patriots find themselves in a similar situation as the Cardinals with their linebacking corps: aging and not much depth. Losing Mike Vrabel only makes matters worse. So the Pats go for an OLB with the 23rd pick, right? To muddle the matter is the rumor mill about Coach Hoodie obtaining Julius Peppers in a trade or signing Jason Taylor since the Patriots have been 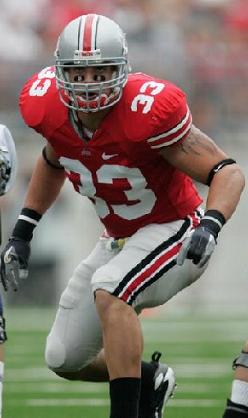 something of the Shady Acres of aging NFL players in recent years (Dillon, Seau, Flutie, Testaverde, Harrison). So if they fix their OLB situation with a veteran, where do they look next? Offensive line, corner back, defensive line, and safety bear consideration. Lastly, the Pats hold the second pick of the second round (34th overall) and have to consider who they think will slide and be there at 34 rather than 23. Unfortunately all my homework I've done is all shot because it seems everyone Mocking ahead of me likes to foil my schemes (Barwin, are you serious @ 18?! I have him sliding to the Pats at 34!). So, I'm going to "wing" it, but this pick is moot if Peppers or Taylor dons the red, silver and blue:

Positives: Laurinaitis has prototype size and athleticism for the inside linebacker position and reads the action quickly. He's gets into position quickly and is very instinctive. He uses his hands well to meet, greet and discard blockers and his best attribute might be his open-field tackling. A form tackler who can generate explosiveness with his hits and is underrated in coverage. He gets good depth on his drops and has good straight-line speed and lateral agility. He's got a good break on the ball and has soft hands for the interception.

Negatives: He'll need to continue to add strength, especially in his upper body because right now he relies on his athleticism and good technique to defeat blocks and can struggle to disengage. He's been consistent and reliable, but rarely made the game-changing play over his career. He's been a productive blitzer but doesn't have a variety of pass rush moves choosing instead to rely more on athleticism, hustle and instincts.

Many thanks to my wife for submitting this pick. The Falcons and CardsFan08 are now on the clock (e-mail to revengeofthebirds@gmail.com), with the Dolphins and CardsIrish on deck. If anyone needs to refresh their memory on the draft order, check here.