The Cardinals had a terrific 2009 season and a large part of it was due to the misfortunes of the rest of the NFC West. The three other teams all finished with records below .500. They've all had an active off-season, and the draft will be sure to stir things up, with all 3 teams picking in the top ten. That leads us to our next segment: NFC West Division Breakdowns. The secondary is the first positional group up for inspection, and the Cardinals were fairly active in signing Bryant McFadden and safety Keith Lewis. Mike Sando seems to think that those moves make the Cardinals Secondary one of the best in the division (and I might have to agree with him). We'll start with our very own.

As a side note, these breakdowns are more of a look ahead to the 2009 season, not grades from last year. I would more so call these roster outlooks, but they are technically not since the 2009 season has yet to come. The rankings are ranked 1-4 with 1st being the best in the division. The grading system was becoming too confusing. 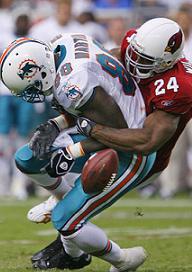 Adrian Wilson (SS): Adrian Wilson is the best strong safety in the NFC West, and possibly the best in the NFC. He's the heart of the defense and keeps everything intact. He's got a high motor and has a knack for getting to the ball carrier/quarterback. He's got the size of a linebacker but can still play well in pass coverage.

Antrel Rolle (FS): Rolle really gelled as a free safety late last year, and may have found his true position. He's the ball-hawk of the secondary and somehow is around the ball whenever it pops loose. He's a solid tackler, recording 88 tackles in 2008, and he is dependable in coverage.

Dominique Rodgers-Cromartie (CB): DRC may have became one of the few shut down cornerbacks in the NFL due to his performance in the playoffs last year. His freakish speed and athleticism allow him to cover even the best of wide outs in the league, and we may see his full potential this year as he will be a full time starter.

Bryant McFadden (CB): McFadden is as solid as cornerbacks come. He has a well-built frame and will add to run-support. He's a physical corner and likes to jam receivers at the LOS. He is another corner that we may see the full potential of next year, as long as he can beat Rod Hood for the starting spot. He does need to work  on his speed and covering quicker receivers.

Rod Hood (CB): He may be the starter next to DRC next year, as long as he can beat out McFadden. Hood is a small corner but has enough strength for physical receivers. He's a dependable cover corner, and is decent for run-defense.

Ralph Brown (CB): Brown played exceptionally well in the playoffs last year and should fill in as solid 4th string cornerback this year. Brown isn't the biggest or quickest corner, and is ideal as a nickel back or special teams.

Matt Ware (S): He's a special teams player, and probably won't get any starting time. He has a tall frame, and is decent in coverage. Ware's not the greatest tackler either.

Keith Lewis (S): Signed this off-season, Lewis may take time from Francisco. He is also a special teams standout.

Bottom line: Arizona greatly increased their secondary by adding Lewis and McFadden, and by retaining Ralph Brown. With the additions and the momentum through last years playoffs, they now have one of the best secondaries in the league.

Deon Grant (SS): Grant has shown flashes of being a great safety in the NFL. In his 8 seasons, he's racked up nearly 500 tackles. He's dependable and is talented enough to pick off the occasional pass or two.

Brian Russell (FS): Russell is a accomplished  proficient safety and has bee 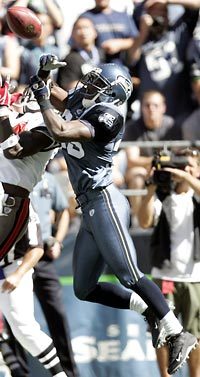 n in the league for 6 seasons now. He's bounced around to a few teams and has put together solid numbers. He's not the quickest safety and he may give up a big play every now and then, but he makes up for it with his intelligence and his strength in stopping the run.

Marcus Trufant (CB): Trufant was regarded as one of the best cornerbacks in the NFL up until last year. Poor performances against some of the top wide receivers in the league (Fitzgerald), may have shown his weaknesses. He cracked under pressure last year when offenses pick on him. Trufant is still a top corner, due to his size, speed, and instincts, and he will probably bounce back this year with a pro bowl season.

Josh Wilson (CB): Wilson replaced Jennings last year and had a good season. He's short for a cornerback but makes up for it with speed and leaping ability. He's shown that he can pick off passes and become a dangerous return man with the ball. He also is a solid tackler. If he can improve on his timing and play more physical with taller receivers, he can be a force in Seattle's secondary.

Kelly Jennings (CB): Jennings was drafted to play along side Trufant, and become a dangerous cornerback duo in the NFL. He did show signs early, but he ultimately failed. While Jennings possesses good enough run defense, his ball skills were terrible in '08. Jennings was burned several times in the first couple games last year and lost his starting spot. If he can increase his coverage skills, he may get another opportunity this year.

Kevin Hobbs (CB): Hobbs has primarily been a practice squad member but injuries allowed him to get some playing time last year. He's currently a 4th string cornerback and may get more time to show his skills this year.

Jordan Babineaux (S): Babineaux  may be one of the most talented and versatile back up defensive backs in the NFL. He's known for his big plays, one of them being in a wild card game against Dallas a couple years back. Most remember when Tony Romo bobbled the field goal snap, and Babineaux was there to tackle him. Baineaux can play cornerback, safety or special teams.

C.J. Wallace (S): Wallace is another undrafted defensive back, a trend they have seemed to show over the years in Seattle. Injuries have already limited his career but his size and run-support have shown that he can be a legit 2nd string safety.

Bottom line: Seattle's secondary was riddled with injuries last year and it showed in their play. If they can stay healthy, they may be able to be proficient enough to be one of the top units in the league.

Michael Lewis (SS): Lewis applies to the word, "strong" safety. He is a well built safety who's known for his hard hits. He's also known for not being well-suited in coverage. If he can improve his speed and vision, he can be a top strong safety in the league. Otherwise he's just a solid piece to the secondary.

Dashon Goldson (FS): Goldson has won over many fans at times, but there's s 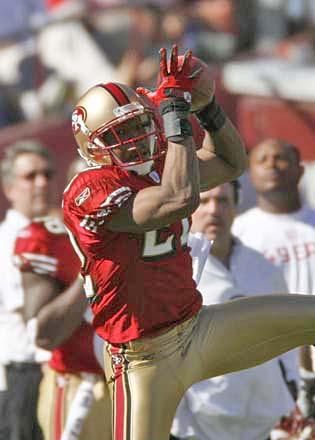 till some uncertainty with the young safety.  He's already shown that he can handle a starting position and he's got the skills to do it. He's a strong special teams player and is an above-average run defender.

Nate Clements (CB): Clements can be the best cornerback in the league, and then at times he's just above average. He's a very physical corner, likes to blanket receivers, and often gets in their face. As long as he's not being picked on, he's the best defensive back on the team, and one of the best in the league. He's still young and should be a cornerstone in the 49ers defense for years to come.

Walt Harris (CB): Harris is getting older and may have lost a step to his game. When he is playing his best, he can be one of the top corners in the league. When Harris plays underneath, he's capable of batting away a lot of balls and picking off passes. If he can stay healthy this year, he's a great compliment to Clements, and they make one of the best duos in the NFL.

Tarell Brown (CB): Niner fans are high on Brown and his coverage skills. He's shown that he can be a very solid corner, and as long as he doesn't have anymore character issues like he's had in the past, he's got a fighting chance for the #2 cornerback spot on the team.

Shawntae Spencer (CB): Injuries have plagued his short career so far, but if he can bounce back in '09, he may get a shot at the nickel back spot.

Mark Roman (S): He's the hated member of the secondary, and as of now, Roman is the primary back-up. That may no last long as he's a poor coverage safety, and usually gives up big plays.

Reggie Smith (CB): Smith hasn't had a chance to prove himself, and but he is a dependable special teams player. Due to his slow speed, he may be better suited at safety if the Niners bring in another cornerback to take his place.

Bottom line: If San Franciscos' secondary can stay healthy and bounce back in '09, they can become a legitimate unit in the league. They do need to solidify their depth though.

James Butler (SS): Butler, a former New York Giant, was originally an undrafted special teams player. He eventually worked his way up the depth chart and started for the Giants in '07, and recorded 10 tackles in the Super Bowl. He's an explosive player, and is a tackling machine. He's still young and may have 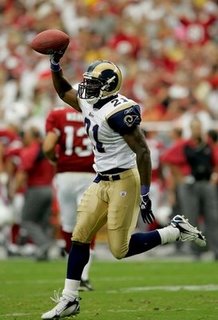 O.J. Atogwe (FS): Atogwe could be the most dynamic safety in the NFC West, or the NFL, second to Ed Reed. OJ is the playmaker of the defense, and he's usually somewhere around the spot of the ball. He's got great speed, and has a solid form for tackling. He's capable of dropping back in coverage, or helping in run support. Those honors earned him the Rams franchise tag.

Ron Bartell (CB): Bartell is a confident corner that has a tendency to bat many balls away and pick off passes. He's fast and recognizes plays quickly. He has good size and was one of the few bright spots for the Rams last year. The main downfall to Bartell is that he may struggle with the run. He finished the season with 5 interceptions and 6 forced fumbles.

Tye Hill (CB): Hill is a former 1st round pick that has shown glimpses of being an above average corner.  He has very weak anticipation skills, and that cripples his ability to disguise coverage, which is very important for cornerbacks in the NFL. He hasn't shown the ability to fix his mistakes, which isn't a good thing.

Jonathan Wade (CB): Wade is a versatile defensive back. He played receiver in college and most believe him to have solid hands. He plays special teams and has shown the ability to be a good tackler.

Justin King (CB): King is another young prospect that may show his full set of skills in '09. An injury put him out for the season last year before he had a chance to play at all. He has a tall frame for a corner and great speed, running the 2nd best 40 time at the combine with a 4.31.

Eric Bassey (S): His two year career has mostly been on the practice squad, but injuries let him play in 8 games last year, recording 11 tackles. He may get a chance to prove himself in 2009.

Todd Johnson (S): Johnson doesn't have the ideal size for a safety but he makes up for it with his tackling ability. He isn't starting material but he is a dependable back-up if he is needed to come in and play.

Bottom line: This young unit of defensive backs does have the talent (Atogwe and Bartell), but they're still unproven and gave up too many big plays last year.