Disclaimer: This is not based off of any rumor or story as far as I know. This is strictly what us here at RotB have thought up, and are sharing with each other. Any feedback or suggestions are welcome.

The 2009 NFL Draft is still a month and a half away, but we here 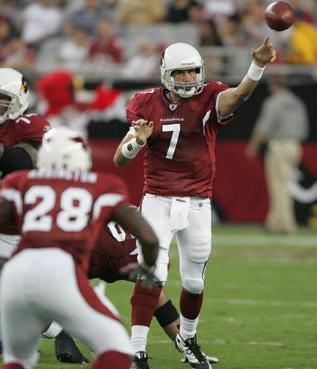 at Revengeofthebirds, like to think ahead. With the off season a week under way, the Arizona Cardinals have yet to add any key pieces, other then their own. With Warner out of the way, Rod Graves and management still have to situate the Anquan Boldin problem, along with resigning Adrian Wilson, Karlos Dansby, and Darnell Dockett all to long-term deals. They are all important factors to the defense, and are essential to the team staying consistant from last year. Aside from a special teams player in Keith Lewis, the Cardinals haven't signed any other players. I have wondered if Rod Graves has any tricks up his sleeves or any potential moves he is saving for later in the off season.

With Warner signing a 2 year deal that will pay him starter money, that leaves hollywood Matt, Matt Leinart on the bench for at least another year. Most here think he will be gone after his contract expires and that's completely reasonable. So why wouldn't the Cardinals try to get value out of him now? There are several scenarios that could play out as the draft gets closer, or even on draft day. First, is the Matt Leinart scenario:

Of course, that is just many ways it could go down. The Lions may ask more for in exchange for their 1st round pick or not give it up at all. Even if the Cardinals were to only get a 2nd and a 3rd from the Lions instead, it would still give them a chance to draft more quality players. The Lions aren't the only team with a quarterback need but it would benefit them the most.

Next up is the Anquan Boldin scenario. Hevchv broke down his own scenario earlier, by suggesting that we trade Boldin to the Cowboys, for Felix Jones, their 2nd and 4th picks of this year, and a 2010 1st round pick. Boldin has expressed that he wants out of Arizona or that he would like to be traded. Then he has said that he is willing to sign a long-term deal but wanted one no later then Tuesday of last week. The Cardinals obviously didn't offer one and now we are all waiting to here Boldin's next statement/complaint. Since the Cardinals didn't resign him when they had the chance, does this mean they don't plan on keeping him on the team? Or were they more concerned with resigning Warner? All I know is, Boldin could get a lot in return and fill needs via the draft. (Now, I'm a huge Boldin fan and love what he's done for the team over the years, but the fact is, he's made a big deal over this contract. Call it his agent or himself, but he's caused too much headache for the Cardinals and their fans.) That leads to the Anquan Boldin scenario:

You can rule out trading Boldin to the Jaguars, Titans, and Vikings, as the Cardinals play them next year, along with any NFC West teams for obvious reasons. The deal isn't asking too much since the Cowboys got a much less talented receiver in Roy Williams, for almost the same amount of picks from the Cowboys in 2008.

These are just a few thoughts and are nothing serious. If either one were to happen, or even both, I certainly wouldn't have a problem with it. Feel free to send any angry comments to CG or Hawkwind, comment me if you have your own opinions about this subject. Of course, we always welcome any ideas. What are some other potential trades or deals that you wouldn't mind seeing? What should the Cardinals do with players that need new contracts?