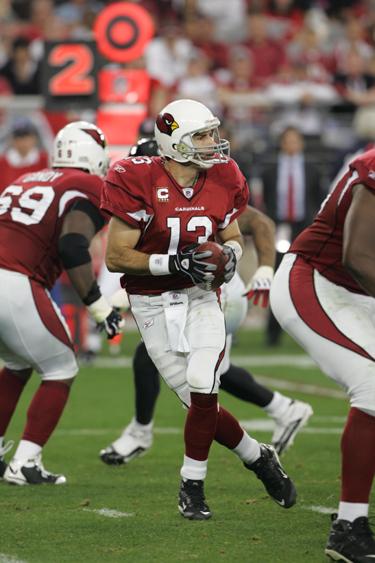 en on the left side of the page). The race was close with Larry Fitzgerald not far behind, along with Anquan Boldin and Reggie Wells in a distant last place.

Apparently all the contract talk has not turned Cardinals' fans away from Kurt Warner, as he won this award. Either way, he was a main reason for appearing in the super bowl and nearly got the win for us. When it all comes down to it, he made the 2008 as special as it was and had the best season for a quarterback in Arizona Cardinals history. Now that he has officially decided to come back for another two years, he has another chance to get the Cardinals a ring and continue on with the team's newly found success.

Kurt did what past quarterbacks were unable to do in the desert; lead a worthy team to the super bowl, and make the franchise more respectable then it has ever been before. Not only that but he himself, may have changed how fans feel about the team and create a hype about the Cardinals. He now holds 5 Cardinals' records and nearly took the record for most yards in a season. Most critcs figured Warner would get injured somewhere down the line, and not be able to play in every game. He proved them wrong when he started every game of the season, the playoffs, and later at the Pro Bowl. The season was magical and will be remembered as one of the greatest in Arizona Cardinals history.