Positives: LeSean McCoy will be entering the draft as one of the fastest running backs available. McCoy possesses a rare speed and elusiveness that makes him very hard to catch. He has the ability to cut on a dime, and shoot up the gap when a hole forms. Once McCoy gets through the defensive line, he's virtually unstoppable in the secondary, as he can regain full speed very quickly. He's very dangerous in open space, as he can juke and move his way past most defenders. He's known for his vision and patience, and will wait for a hole to develop before running through it. He has great hands and will excel at the screen pass. While at Pittsburgh 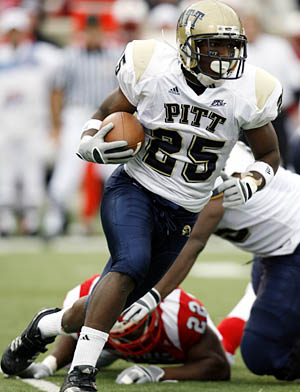 Negatives: The only negative that seems to hurt McCoy is his size and strength. Most think if he were to develop more power, then he would be the complete package. He doesn't have the size to be an elite running back as well. He may struggle with short-yardage situations, as he might not have enough strength to get that extra yard. He doesn't always switch the ball to his outside hand, and runs wildly at times. He may be a liability with pass protection, as he doesn't always square up on blitzing linebackers.

Overview: McCoy has become a very popular prospect leading up the draft and is sure to remain one till the 2009 season starts. He has a bright future ahead of him, and will be somebody in the NFL. He would serve as a spark plug to the running game for any team that drafts him. His weaknesses can be coached and his strengths certainly have room for growth.

Reasons the Arizona Cardinals should draft him and ways he will fit into the offense...

Why he should be a Cardinal: McCoy would immediately improve the running game and compliment grind-it-out running back, Tim Hightower. He would fill the speedy void that draft bust running back J.J. Arrington left. Edgerrin James is also expected to leave, therefore, he would fill an overall need at running back. He doesn't have any character issues and takes pride in the way he plays.

How he fits into the Cardinal offense: The most obvious way he would fit in would be spelling Tim Hightower, as both running backs have different styles. LeSean produced better without the full back option, so he would be used primarily by himself in the backfield. He would add another dimension to the passing game as well. He has good hands and the screen pass would benefit him by putting him into open space. From there, he would provide a burst off of the edge.

I'm quick and have great cutting ability. I have good vision and I can just take over a game. I'm like Barry Sanders because I'm a determined team player with great moves.

Bottom Line: McCoy is a quick running back that will help any team that drafts him. He can improve many aspects of an offense and any negatives about him can be fixed. If he is drafted by the Cardinals, expect a vast improvement in the running game, and even more production to our wide receivers. What do you like about McCoy? Is there any major concerns you have with him and why the Cardinals should not draft him?