The 2008 Atlanta Falcons were one of the teams who capitalized on an excellent off season and focused on their weaknesses in free agency and the draft, with the result being 11 wins and making the playoffs. The team's current weaknesses are TE, DE, LB, and CB. The offense is loaded with weapons but could be completed by the addition of Brandon Pettigew, known for his ability to go over the middle, provide good blocking, and stretch the field. However, the needs of the defense, in particular DE/LB, takes priority after that Falcons lost starters Keith Brooking, Grady Jackson, Michael Boley, Domonique Foxworth, and Lawyer Milloy. The current philosophy of the Falcons is to draft starters and to supplement with free agency, and with so much attention during the combine being focused on the CB and Safety position it seems as if this will be a defense focused draft. At this position due to who was left on the board the Falcons pick Larry English because of his versatility and his ability to get after the quarterback in either the DE or OLB spot. With this pick they get a building block that can either help up front or with the linebackers depending on the rest of the draft and pick-ups after the draft. His talents have been shown at either position and he will quickly adapt to wherever the Falcons need him most. 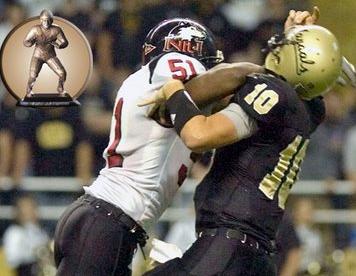 Positives: English is a high motor, relentless defender. He's a tweener who has the ability to fit in either DE-OLB spot and will build into the position. He has an excellent first step and closing speed with good strength to round the edge. He tackles well in free space and would be an immediate starter in a 4-3, but may need some time to find his position in a 3-4. He has a very high vertical jump, strong hands, and is an excellent pass defender due to his size and speed.

Negatives: Because he's a tweener he'll need to continue to develop and add strength and size if he is going to become a DE, however, he is closer to being the right size for an OLB. He has impressive straight line speed and moves well in space, but doesn't change direction as fluidly as is necessary for the OLB spot. His other knock is that for his size he should have faster 40 times, but consistently ranges from 4.6 to 4.8.

Many thanks to CardsFan08 for submitting this pick and supplying an excellent write up. The Dolphins and CardsIrish are now on the clock (e-mail to revengeofthebirds@gmail.com), with the Ravens and Fireking on deck. If anyone needs to refresh their memory on the draft order, check here.