The Patriots secondary hasn't quite recovered yet from the loss of Asante Samuel and Deltha O'Neal is not the long term answer. The rest of the starting secondary is young and promising (Ellis Hobbs, Brandon Meriweather and James Sanders) but Smith bring a ball hawking attitude to the defense. His return ability is equally appealing and gives the Pats a couple of different return options. Here's what ROTB had to say about him in their potential draft profile:

Positives: Smith is a big player in a small package. He is very fast with explosive 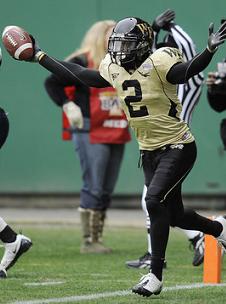 agility. He breaks well on the ball once it's released, and has great hands. Not scared to jam a larger receiver and be very physical with them. Also not afraid to be on an island, and can hold his own while staying shoulder to shoulder with any receiver he covers. Likes to help out against the run, and will often go after the ball carrier. Will try to strip the ball when gang tackling or at the bottom of a pile. Eyes are usually on the quarterback, and is able to adjust quickly to the ball's direction. Once he picks off a pass, he is a very dangerous returner, and may help on punt returns as well.

Negatives: Alphonso is short for a corner, and may struggle against larger, physical receivers. Although he had a great vertical jump at the combine, he may not be able to out-jump a tall receiver in the end zone. May have a hard time winning a battle for the ball with stronger receivers. Struggles with wide receiver blocks on running plays as well. Not a great tackler.

Overview: Smith is probably the 3rd or 4th best corner back in the draft. His great speed and physicality with receivers may make him a first round pick. He's been projected as a 1st round pick, but obviously slipped this far, and now that the Patriots were able draft him to improve their secondary.

Many thanks to my wife for submitting this pick. The Rams and myself are now on the clock with the Browns and Cardinal_Fang on deck. If anyone needs to refresh their memory on the second round draft order, check here.