As this has become an increased area for concern for the Cardinals, we'll breakdown the running backs within the division next. The NFC West actually features some premiere running backs in the NFL. All three teams except for the Cardinals, seem to be secure at the position. The Cardinals will likely add to this postion in the draft, but either way, they' won't be first in the division. This was a tough split between the 49ers and the Rams, but the Rams depth gives them the number one spot.

As a disclaimer, this is NOT a breakdown from last year. I've also decided to drop the grading system due to too much confusion and adopt the ranking system. Finally, these are breakdowns from within the NFC West,  NOT the entire 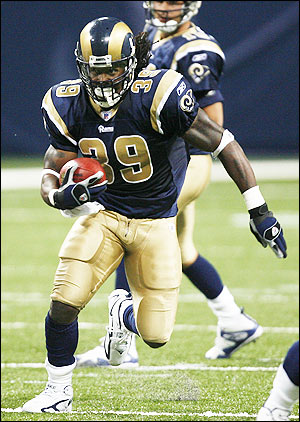 Steven Jackson: Jackson is the most punishing running back in the NFL. He's got great size, speed and power. He can cut straight up the middle for a big gain, or can take it to the outside and earn his yardage. He's had some injuries but he's virtually as tough as they come and makes secondaries pay once he's there. He's a threat at receiver and a capable pass blocker. Jackson is still young and after he received a new contract, he'll be a Ram for years to come.

Brian Leonard: Originally Leonard was a full back, but with injuries to Jackson, Leonard came in and proved he could handle the load. He's not the quickest back, but he carries a lot of power and usually picks up positive yardage.

Antonio Pittman: Pittman will compete with Leonard this upcoming year for the 2nd string spot on the team. Pittman has good size and quickness for a running back, and has stepped up when Leonard and Jackson weren't able to play for whichever reason. He has a good initial burst and can make defenders miss in the open field.

Frank Gore: Gore has become one of the best running backs in the lea 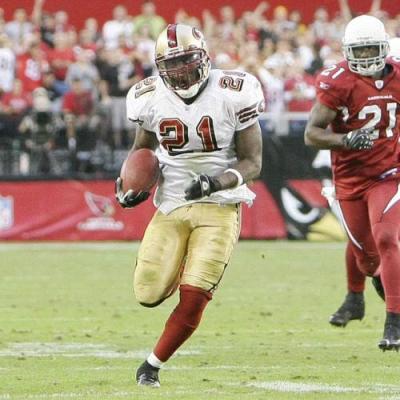 gue and he's still just 26 years of age. Gore has the ideal size for an NFL running back, and runs with a great intensity. He can break a big run once in the second level, and has enough strength to carry defenders for first down. Gore's also very consistant and has gained over 1,000 yards the last few years with poor offensive lines. He's also a good receiver and can pick up yards after the catch to get the 1st down.

Michael Robinson: Robinson isn't the biggest back, and is suited more for quick plays or kick returns. Robinson played quarterback in college, and as a result, the 49ers tried using him in the 'wildcat' formation several times last year. He's a quick back but needs to bulk up to be an effective running back.

Thomas Clayton: We don't know much about Clayton as he's only been in the league since 2007. He hasn't played in any games and due to Gore's dependability, he probably won't get any playing time any time soon. He does have the ideal size for a running back though, at 5'11 and 222 lbs. 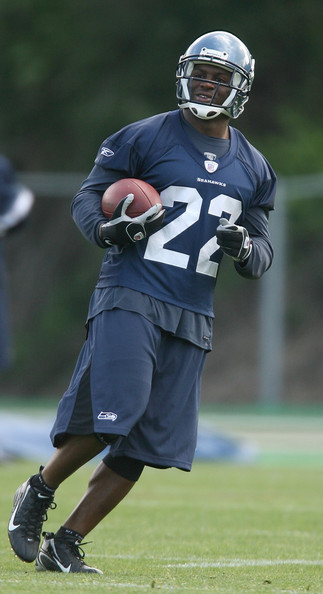 Julius Jones: Jones will likely never be a franchise back, but he is capable of carrying the load for the team. Last year in his first year with the Seahawks, Jones proved he could handle starting duties by running effictively when the pass offense was struggling. He's built well and can run fast enough to break away from defenders when one on one. His main drawback is that he needs to become a more consistant  force on offense.

T.J. Duckett: Duckett has already bounced around from team to team, and will always be used for short-yardage or goal line situations. He's a huge power back that can plow through a defensive line, but his speed will keep him from breaking off long runs.

Justin Forsett: Most Seahawk fans are high on Forsett and what he might be capable of. He's a speedy, well structured back that needs some more time to develop. He's a threat at kick returns and a solid special teams player, but has yet to prove himself on offense.

Even with the addition of a rookie running back likely taken in this year's draft, the Cardinals will still rank last until they prove the running game has been improved. 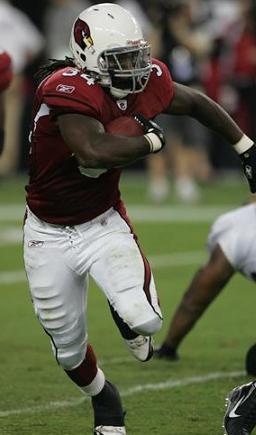 Edgerrin James: It's a weird spot to put Edge, but if he somehow stayed with the team in '09, he'd be the starter. Eventhough Edge isn't in his prime anymore, he's still able to help in the running game and be productive. He's one of the most dependable backs in the league, as he is able to run effectively, catch the ball, and provide sure blocking.

Tim Hightower: Hightower showed flashes of being that franchise back the Cardinals have been waiting for last year. Then at times, he failed to average over 3 yards per carry. He's a quick and tough back that could be a full time starter, but he needs to develop his game more, and stop dancing around in the back field.

Jason Wright: The recent addition of Wright fills the void that J.J. Arrington left. He's just about average in every aspect of his game, and does just about everything that you could ask from a running back. He'll also take the place of Arrington on kick returns.

Although I'm sad to rank the Cardinals 4th within the division, I am optimistic that with a good draft and improved offensive line chemistry, they will be a better rushing team in 2009. So now's your chance, go ahead and rip into me about how terrible this breakdown is. : )