As a side note, Happy Easter from us here at ROTB. 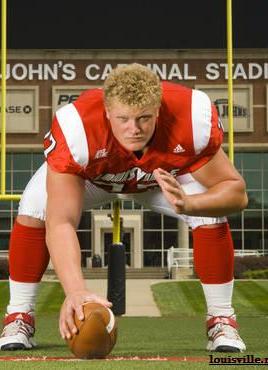 Positives: Wood is a big 6'4 center with a solid frame that can bulk up if needed. He has large hands that are capable of fighting off defenders. He has good upper body strength and can push defenders back at ease. He's a smart player who studies game tape for hours and can take in coaching and apply it on the field. Wood is an "old school" player that plays with a high motor and aggresion. He gets off of the snap quickly, and shows solid balance. While run-blocking, Wood excels at the one-on-one battle. His initial pop on defenders allows him to lock on and drive them back. While pass-blocking, Wood does a good job mirroring defenders and acting as a wall. He's solid against quicker defenders and doesn't quit until the play is over. Wood could also make the move to guard as he is a great swing man and excels at the screen pass.

Negatives: Wood isn't the quickest center entering the draft and needs to work on sliding over to oncoming defenders. He's not quite quick enough to get to second level defenders either. He needs to play with a lower center of gravity, and needs to bend his knees so he can square up on defenders. He sometimes stands too tall at times, and will struggle with the larger nose guards in the league. He lacks lateral quickness and his hips can appear to be too stiff at times.

Overall: Wood would be a solid addition in the second round if he somehow slipped to the Cardinals pick. He's a dependable player who will keep his legs driving and plays with a mean streak. He's a straight line center that does a good job matching what the defender brings. If he can improve on his quickness and lower body strength, he can be an anchor for any teams offensive line.

Projected Round: 2nd round

Why he should be a Cardinal: Wood should be a Cardinal because he would be a young, aggressive pick-up to the middle of the offensive line. He would still have time to develop into a starting center behind Sendlein, and if needed, he could make the transition to guard if the Cardinals needed him to.

How he would fit into the offense: Wood would be mainly used on special teams. If he were to start for any reason, he could man the middle of the line and provide good pass and run support. He excels and screen pass blocking, which the Cardinals will use from time to time.