The Seahawks need safety and corner back help. While Marcus Trufant had a bad year last year, he's still one of the better corner backs in the NFC. The rest of the DB's for Seattle are either short or Brian Russell. Brian Russell is the crappiest player in the NFL. Seriously. Check this out, or go to Field Gulls, they like B. Russell a whole lot.

With that in mind, the Seahawks 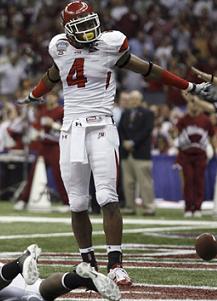 are getting a steal and taking Sean Smith from Utah. 6'3", 214 lbs. with the size (obviously), fluidity and footwork to be a corner in the NFL. He needs some work on technique, but he might be the best corner in the draft as he is not scheme limited. Do you think the Seahawks could use a guy like this against Fitz and Boldin? I think they'd like that. If, as some pundits think, he can't make it as a corner, they can treat him like Antrel Rolle and move him to safety. Which is a lot more palatable when it's a second round pick as opposed to a first round pick like Antrel was.

So why not draft someone like Sherrod Martin who actually is a safety right here? I feel this is best player available and a position of need. Not the EXACT fit, but still a fit and easily the best player left on the board.

Positives: Smith is blessed with tremendous size and quick feet. He's got the straight line speed to run with receivers down the field and the size and physicality to jam them at the line. He won't hesitate to provide solid run support and can be an effective blitzer. He's also got excellent ball skills being that he's a converted wide receiver and can be a terror with the ball in his hands. Considering that he's only been on the defensive side of the ball for two seasons after playing running back and receiver.

Negatives: As always his versatility to play both corner and safety makes him a bit of a 'tweener' prospect. He's not as physical a tackler as some would prefer from a safety and his hips are as fluid as some expect from a corner back. He can get too aggressive at times and is a cocky, trash talker on the field. His skills are impressive but he's a very raw player who could take some time to develop.

Many thanks to KDean75 for submitting this pick and an excellent write-up. The Bengals and LaCardsFan are now on the clock with the Jags and AZCARDS66 on deck. If anyone needs to refresh their memory on the second round draft order, check here.