Regardless of how much we'd like to ignore the situation, every time a top tier linebacker receives a new contract we'll have to talk about how, if at all, it effects Karlos Dansby's situation with the Arizona Cardinals. Such is the case this week with the signing of James Harrison, reigning Defensive Player of the Year, to a six year deal worth $51.5 million over the next six seasons (with a cool $20 million in guarantees). Now I understand that they don't play the same position and that Dansby's resume would pail in comparison to Harrison's past two seasons but make no doubt about it, Karlos Dansby is looking for that kind of pay day (if not more). 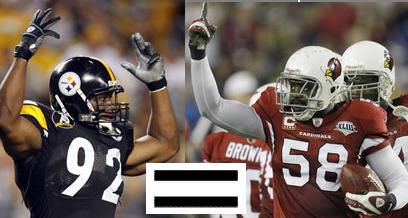 There haven't been any developments in the Dansby's search for a new agent, which also means that there hasn't been any progress towards a new contract, but his old agent is talking. Kirk Wood, Dansby's former agent, has reportedly said that there was a framework in place for a six to seven year deal similar to the one that Bart Scott signed with the Jets (6 years for $48 million) at the beginning of free agency. The deal supposedly had somewhere around $22 million in guarantees and $12 to $14 million in the first year of the contract, but of course we all know that Dansby fired Wood shortly after negotiations started. The real question is, why?

Does he want even more money? If Dansby is looking for a more lucrative contract that Scott received, I wouldn't imagine that Harrison's contract changes anything. While the specifics of his deal have not been released yet, Harrison barely received more 'overall' money (what's $3.5 million over 6 years really?) and he actually received less 'guaranteed' money, so one could argue that Scott actually holds better contract. The bottom line is that if Dansby wasn't happy with Scott's contract, he won't be happy with Harrison's contract either.

Does he even want to sign a new deal this year? As we heard last week, Dansby has said he wouldn't mind making a 'splash' in free agency next year with the possibility of an uncapped NFL. We're not ones to start conspiracy theories and it's probably a reach to say that Dansby fired his agent because he was close to completely a deal but the timing certainly raises some questions. The fact that he hasn't hired a new agent raises even more questions because I highly doubt that he's representing himself at the bargaining table and the Cardinals are facing a mid-July deadline to re-sign him.

The Cardinals find themselves between a rock and hard place with Karlos Dansby but right now they're hands are tied. Not only can they not negotiate terms but Dansby seems content with testing the free agent waters next off season. So what are the odds of seeing Dansby in a Cardinals jersey in 2010?