Most scouts project Johnson as a stand-up outside linebacker but fall in love with the flash of Michael Johnson's workouts. The Raiders registered a respectable 32 sacks in 2008 but 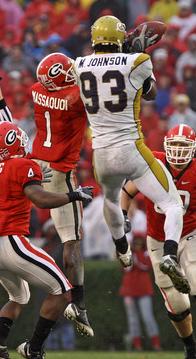 Derrick Burgess is aging and has been in decline since his breakout, 16 sack season, of 2005. He'll soon be 31 years old and there's a significant drop off to the Raiders second best pass rusher. Johnson won't be forced into the starting lineup considering that the starters are at least decent but he could be at least a situational pass rusher who could take some pressure off of Burgess. Questions remain about Johnson's motor and desire but his physical talents make him a value pick with the 40th overall pick. Here's what we said about him as a potential draft pick:

Positives: If you look up physical freak in the dictionary, Johnson's picture will be right there next to Brian Orakpo, Vernon Gholston, Vernon Davis and perhaps the greatest combine warrior of all time Mike Mamula. Johnson was a top performer in four different categories at the combine (40, vertical jump, broad jump and 20 yard shuttle) staking his claim to one of the athletic defenders in this draft. An explosive first step, that's second to none, leaves plenty of offensive tackles hugging air and he's got the pure strength to be an effective bull rusher. His frame, as impressive at it is, can still add some bulk to his frame without effecting his quickness or top end speed. He uses his long arms well to keep opposing lineman away from his body and protect his legs. His height also allows him to bat down a fair share of balls and he's a punishing tackler who uses his hands well to strip opposing quarterbacks. He also dropped into coverage more often than most defensive ends so he has some experience in space.

Negatives: You're probably asking yourself why this amazing player isn't a top five or top ten pick, right? Well he's a classic underachiever who didn't become a full-time starter until his senior season and many say that he amassed most of his stats against lesser competition. Prior to his senior season he was basically a situational pass rusher and many think that he never abandoned that mindset. He routinely would run himself out of plays by abandoning his gap to take a speed rush lane. He can really get driven out of a play if a blocker gets under his pads and can at times be a complete liability against the run. At times he won't pursue plays that get by or go away from his position and his motor, intensity and commitment are constantly under question.

Many thanks to ianbbc02 for submitting this pick. The Packers and JallRed350 are now on the clock with the Bills and Bezekira on deck. If anyone needs to refresh their memory on the second round draft order, check here.