The Packers have many needs on the defensive side of the ball as they look to move to the 3-4 next year. They have decent depth at the NT position, if not great quality. Aaron Kampman will be moving to OLB next season, leaving a gaping hole at DE, where the Packers lack depth and quality at this time. With this in mind, the Packers select Robert Ayers, DE, Tennessee. 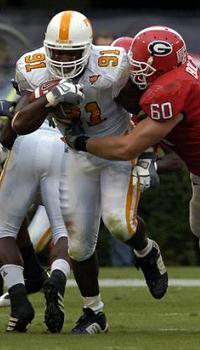 Weighing in at 272, Ayers is currently a little undersized to play DE in the 3-4 scheme. Some scouts feel that he has the ability to put on 10-15 pounds which would put him right in the sweet spot for the position. Even if this endeavor fails however, it is thought he could make the move to OLB as well. This versatility makes Ayers the right pick here. He is first round talent, with some recent mock drafts having him go as high as 11. There is no doubt that he is better suited as a 4-3 DE at this time, but getting a player of Ayers' ability at 41 is hard to pass on.

Positives: Ayers is a unique combination of athleticism wrapped in a big package and some teams are even working him out as a outside linebacker. He's a natural athlete with a good burst and great balance. He's a physical player with a powerful punch who holds his ground against the run and is an impressive bull rusher. He's able to shed blocks and makes plays in pursuit. He's got some versatility and is really rising up draft boards after a great performance during the Senior Bowl week and workouts.

Negatives: Ayers ran into some off the field problems and clashed with coaches early in his college career but by all accounts has matured over the past couple of seasons. Those problems kept him from becoming a starter until his senior season and for that reason he's still somewhat raw in some areas. He needs to develop better pass rush moves and work on maintaining leverage. His lack of starting experience has also prevented him from having great instincts and he can be undisciplined at times.

Many thanks to JallRed350 for submitting this pick. The Bills and Bezekira are now on the clock with the Niners and bcloirao on deck. If anyone needs to refresh their memory on the second round draft order, check here.