The Bills opened the off season by releasing starting guard Derrick Dockery and watching their starting center (Duke Preston) sign with the Packers. 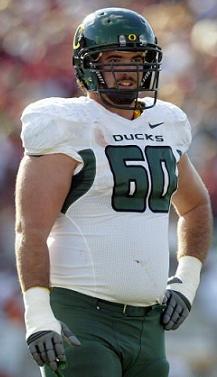 Even though they weren't pleased with either player enough to want them around in 2009, their departure leaves a gaping hole in the middle of an offensive line that wasn't all that great in 2008. To fill some of the holes the Bills signed Geoff Hangartner to be their starting center but guard is still an area in serious need of an upgrade. Unger is officially listed as a center but he's capable of playing all three interior spots and even sliding outside to tackle in an emergency situation. Other positions could also use some talent, namely tight end, but the value here is Unger. Here's what we said about him as a potential draft pick:

Positives: Unger's a smart, four year starter for the Oregon Ducks (51 consecutive starts) who's won multiple awards including being named to the All-Pac Ten Team the past two seasons. He's extremely versatile with two years as the Ducks' starting left tackle before moving inside for his final two seasons at center. Good feet and technical proficiency are his calling cards and despite not being an overly big lineman, he looks to dominate his opponent and plays with a mean streak.

Negatives: The biggest question on Unger, as with most centers, is his strength. He's not a mauler and powerful nose tackles will give him trouble. At times he'll overextend, which will lead to him losing his balance and Oregon's offense operating primarily out of the shotgun, so he's not overly familiar with the QB under center. He needs to be limited to inside traps and pulls because he can get too tall at times, which leads to him being overpowered.

Many thanks to Bezekira for submitting this pick. The Niners and bcloirao are now on the clock with the Dolphins and CardsIrish on deck. If anyone needs to refresh their memory on the second round draft order, check here.