Immediately it will be apparent that the All-Time Defensive Ends list is biased to recent franchise history and this is due primarily to one simple fact: quarterback takedowns, aka sacks, didn't become an official NFL statistic until 1982. As Hall of Fame DE Deacon Jones succinctly stated, "Since when does ‘all-time’ begin in 1982?", and for a franchise as old as the league this makes our list a bit of an oxymoron. Sacks will forever be the scale that defensive ends will be measured by and why some deserving names may be missing. As always, if there is an omission, please vote "Honorable Mention" and pitch your case as these articles are not only to help pass the off-season away but an opportunity to learn abo 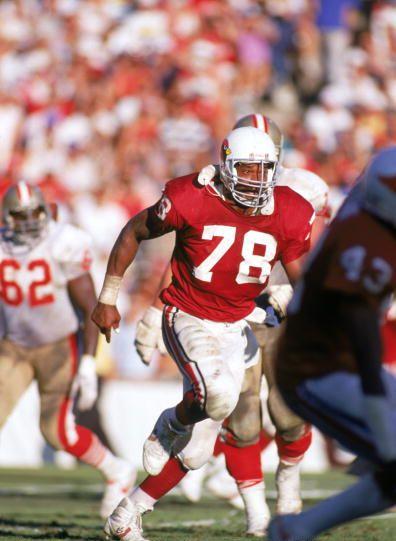 ut the rich history of the Cardinals franchise. Before we move on, we should note that Tom Banks won the all-time center position on the offensive line.

Originally drafted as an outside linebacker, Nunn turned into a sack master when he was moved to defensive end, racking up 11 and 14 sacks in '87 and '88 respectively. A solid edge rusher throughout his career, Nunn averaged over seven sacks a season during his nine years with the Cardinals and is the career leader for sacks with 66.5. He could undoubtedly be one of the more underrated defensive ends in NFL history as never made it to an All-Pro team or a Pro Bowl. 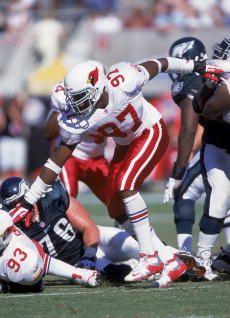 Rice was the 3rd overall pick in the 1996 draft and was one of the most successful players in Cardinals history, recording 51.5 sacks in just 5 years in Arizona. He came into the league with a storm, recording 12.5 sacks as a rookie, and earning Defensive Rookie of the Year honors. Not only was Rice a consistent pass-threat, but he was also a successful run-stopping defensive end. Most Cardinal fans may not like him because of his bad attitude, but there's no denying that he was one of the best defensive ends in Cardinal history. 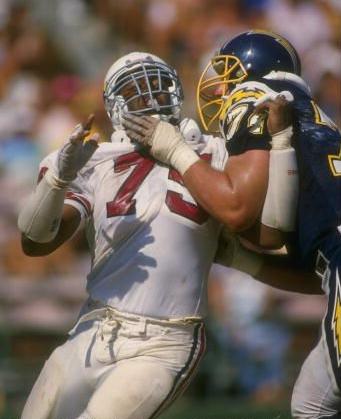 Greer, a former 6th overall pick was a beast coming out of Michigan, standing 6'4 feet and 256 pounds. He played his entire career for the Cardinals and was one of the more dependable ends in history. He's currently 3rd all-time in sacks for the Cardinals franchise with 50.5 sacks. He also held a span from 1982-1984 where he recorded 37.5 sacks, which was the best in the NFL for that time.

Although Al "Bubba" Baker's best years were behind him when the Cardinals signed him (1st Team All-Pro, 3 straight Pro Bowls, DROY), the former 2nd round pick of the Detroit Lions turned out to be a solid addition to the team. In just 4 seasons with the Cardinals, the 6'5, 265 pound defensive end racked up 37.5 sacks, which translated to 9.3 sacks a season. He was also a more dependable player, starting 60 out of 63 games for the Cardinals. 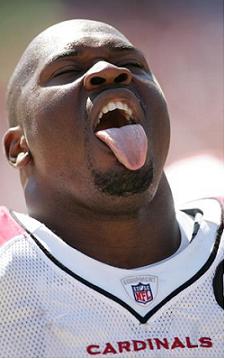 Although Berry may get overlooked due to his injuries, Berry has been the heart of the Cardinals defense during his career, especially last year. In his first year on the team, Berry sacked quarterbacks 14.5 times, and earned his first trip to the Pro Bowl. Even though he spent the next three years ending the season on injured reserve, he was able to bounce back and have a productive season last year, and he was one of the reasons the Cardinals were so successful throughout the playoffs. His passion for the Cardinals is apparent as he took a pay cut to stay with the team last year, and recently this year as he will be back for 2009.

So here is the list of nominees for the Cardinals all-time defensive ends. Like we stated earlier, before the '80s, sacks weren't recorded so it's hard to determine any other nominees based on stats. If you feel anybody should be added as a worthy candidate, list who and why.