I know the Niners have Shaun Hill, who has shown some promise, and Alex Smith, who they're not giving up on yet, but Freeman has too much talent to 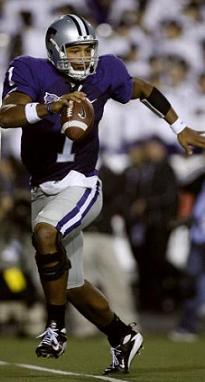 pass up in the second round. He needs at least a year, if not two, on the sidelines, and that should give the Niners time to figure out exactly what they have in the Hill/Smith combo. If one of them emerges as a true NFL QB, then great Freeman can be trade bait in the future (ala Matt Schaub). For now though he'll become an emergency option and potential QB of the future.

Positives: Freeman has excellent size and above average athleticism for his position. He's got great arm strength which allows him to make all the throws and is somewhat accurate when throwing on the run. He's tough, durable and difficult to bring down. He played in a pro style offense at Kansas State and by all accounts was very coach-able and a team leader.

Negatives: His overall game is pretty streaky and he can go through some bad periods. His mechanics, including footwork, aren't great and that effects his accuracy. He'll stare down receivers at times and hasn't developed much at reading defenses. He really struggled against top notch competition in the Big 12, although the talent around him wasn't the greatest.

Many thanks to bcloirao for submitting this pick. The Dolphins and CardsIrish are now on the clock with the Giants and ianbbc02 on deck. If anyone needs to refresh their memory on the second round draft order, check here