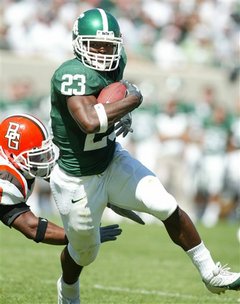 Positives: Ringer is a well-built running back, with enough muscle mass and height to play in the NFL. He is the type of running back that has no problem working with a partner or being the work horse. He has a great work ethic, and puts his heart into every game. He's a team-first player and will often give more credit to his offensive line. Ringer is a tough player, and has shown in college that he bounces back from injuries very quickly. He has a short burst through the hole, and can quickly get to the secondary. He has tremendous vision and can fit through tight spaces. He has shown the ability to be an effective receiver and has soft hands.

Negatives: While Ringer does have nice size, he may not look like he was carved from stone like other franchise-type backs in the NFL. He isn't the quickest back and may get caught from behind when breaking a big run. He can't carry a pile and may not have enough leg drive to get past bigger defensive lineman. He has already had several serious knee surgeries and even though he recovered quickly, that still is a concern for NFL scouts. He's not the greatest blocker and struggles with the bigger linebackers.

Overview: Ringer is clearly not one of the best running backs in the 2009 draft, but he would be a quality pick up in the later rounds. He has a great heart and shows a strong will to win for his team. He has the skills and he has the ability to be a primary back. As long as he can stay healthy and polish his game, he should a solid pick in the later rounds of the draft.

Why He Should be a Cardinal: Ringer should be a Cardinal because of his affect on the draft. By the Cardinals targeting Ringer, they can improve their O-Line in the 1st round. Ringer is also a team player and is not concerned with his legacy like another Cardinal on the team. He's a multi-purpose back that is able to run, receive and handle kick return responsibilities.

How He Will Fit into the Cardinals Offense: Ringer would serve as a dependable back-up to Tim Hightower. Ringer would serve on passing situations and would be used primarily on the screen pass. He would also handle kick return duties with the absence of J.J. Arrington.