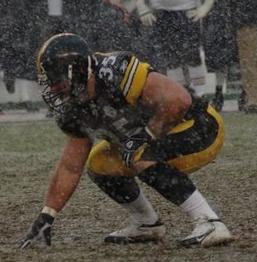 Apparently the Arizona Cardinals looked up and down their roster and decided they could use one more former Steeler. To fill that void they signed former Steeler Dan Kreider, a 32 year old blocking fullback, to a one year contract. Kreider spent the first eight seasons of his career in Pittsburgh before spending less than a full season in St. Louis (they cut him in August). When healthy, Krieder is an excellent lead blocker but that's about all he can contribute to a team. He doesn't play special teams and hasn't ever had double digit carries in his career, although he's topped 10 receptions twice in nine seasons.

The addition of Kreider officially closes the door on Terrelle Smith and means that there are three fullbacks on the roster right now. Tim Castille returns as the versatile fullback and Justin Green as added after the season as a possible blocking back. I guess it goes without saying that Kreider is a "Whiz/Grimm guy" but his addition certainly would suggest that the Cardinals will enter the 2009 season with a re-newed dedication to the running game. What do you guys think about Kreider? What, if anything, does he bring to the table that Terrelle Smith doesn't have?