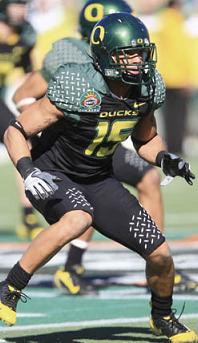 aggressive, strong safety to fill in his shoes. Delmas was who I was hoping for but there's only an inch difference between the two. Chung's ability on special teams and being able to slide over to corner in a pinch will allow him to see the field immediately and be ready to step in full time the following year.

Positives: Chung's got good bulk and plays a physical game regardless of where he is on the field. He's capable of laying a big hit and is always around the ball. He terrorizes receivers across the middle, provides solid run support and is an accomplished blitzer. He's got good instincts, awareness and a work ethic that should ensure he has a solid career. He has played corner and returner so his versatility is something that the Patriots covet.

Negatives: He's bit shorter and slower than scouts prefer from a safety and is not at his best when asked to play centerfield. He can also get too aggressive at times and over run plays or get fooled on play action passes.

Many thanks to my wife for submitting this pick. The Broncos and AJBirdwatcher are now on the clock with the Bears and KDean75 on deck. If anyone needs to refresh their memory on the second round draft order, check here.

Also guys, we're in draft 'crunch time' right now with nearly twenty picks to cover in the next five days so we're going to be hitting these fast and furious. If you can, send a list of three players who you'd like to draft as your pick approaches so that we can stay ahead of the action and knock these picks out quickly.